Manage your diabetes with this app

MADAM Wan Noorinn did not feel confident about managing diabetes well when she was diagnosed in 2012.

She experienced increased backaches and had difficulty sleeping with the onset of the condition. She also found it hard to change her diet, admitting that she did not consume enough vegetables and skipped breakfast often.

But the 49-year-old has succeeded in making changes to her lifestyle, thanks to a mobile app called GlycoLeap, which helps users to control their diabetes and make improvements to their condition.

Madam Noorinn joined the GlycoLeap beta trial programme in June last year and told dietitians through the app that she wanted to take small steps towards changing her diet.

With the help of the app, she mixed a bit of brown rice into white to adjust to the taste. Slowly, she reduced her portions of carbs and at the same time introduced vegetables in her meals.

Madam Noorinn, who described herself as fussy and selective when it comes to food, said that with nudges from GlycoLeap's dietitians, she slowly and steadily introduced changes to her diet.

Now, she is controlling her condition well. "The reading for my glucose level used to be high as 24, but it has dropped to four, since I started getting advice from dietitans on the app," she said.

There are approximately 2,000 such users around the world using GlycoLeap to introduce changes to their diet and get feedback from dietitians on how they can manage their condition.

The app is the brainchild of Mr Nawal Roy, who was inspired to do something in 2015 after reading a sentence in The Economist that said - "For the first time in human history, more people die from chronic diseases than infectious diseases."

It triggered the start of his research into chronic diseases and he realised that there was a gap in the care system. "Chronic diseases, particularly diabetes, are a very large problem. The care doesn't happen until it becomes serious and I couldn't find a solution that takes care of the condition in the early part of the disease," said Mr Roy, who was born in Bihar but moved to the US to do his master of science in quantitative finance and master of arts in economics at the University of Cincinnati and then worked there for 13 years.

The 47-year-old American citizen came to Singapore to join McKinsey & Company as a junior partner in 2010. He set up HelloPay, a payment solutions company, in 2013 but left to explore other opportunities a year later.

Thinking of the gap he found in the care system of chronic diseases and a solution to change it, Mr Roy set up Holmusk in 2015 and produced GlycoLeap over two beta versions, before launching it in June last year.

It is an all-in-one management app for diabetics that allows users to track their diet, blood sugar and weight through both connected devices and in-app services.

It can also be used by those who are more genetically disposed to developing diabetes so they can make the necessary preventative lifestyle changes. Those who have Type 1 diabetes can use the app in consultation with their doctor.

Along with the app, users will receive a connected weighing scale, a glucometer set, a fitness tracker, a weight loss guide and a local food manual. The manual gives the nutrition content of local fare and provides tips on portion control and recommends a diet that is relevant for diabetics.

On the GlycoLeap app, users can take pictures of their meals and it will be automatically uploaded into the system. Dietitians will then rate a user's meals based on a unique food scoring system.

"The intent is not to give users immediate feedback but give them feedback on what they have eaten and what changes they can make," shared Mr Roy. 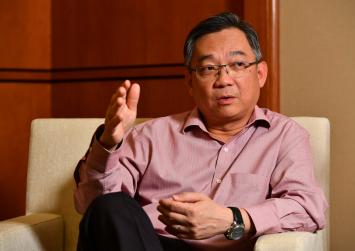 Users will also get daily feedback on their health progress, including blood sugar levels, physical activity and HbA1c (a blood test that gives a good indication of how well one's diabetes is being controlled) goals. If they have questions, they can chat with the dietitians through the message function on the app.

"In the process of capturing all the data, it gives us a better picture of whether you are becoming better, what your trigger points are and how to help you manage diabetes better," he said.

Mr Roy told tabla! that through early and continuous intervention, Holmusk's five full-time in-house dietitians will help them to manage the disease and prevent it from becoming chronic.

"We are a complementary tool to the whole medical system rather than a replacement tool. It's a faster, more engaging process; you don't have to come to our office to get the service from our dietitians, you can get it anywhere, as long as you're on the app," said Mr Roy, adding that the company wants to reach out to as many people as possible in the early stage of the disease to help them manage it better.

Those interested can get a free two-week trial, after which they can choose from two packages. The package that comes with the devices (connected weighing scale, glucometer set, fitness tracker, weight loss guide and local food manual) costs $70 a month over six months. They will be charged $20 a month thereafter. Those who do not require the devices and want to use their own pay only $20 per month, after the two-week trial.

The app currently has about 2,000 users in Singapore, Malaysia, India, US and Europe, and it aims to have more than 100,000 users within the next three to five years.

Holmusk, which was built on Mr Roy's savings and subsequently received US$5.5 million in funding from individual and institutional investors, has 50 people on its staff across its offices in Singapore and Malaysia.

Even though much of Mr Roy's time is taken up by managing the start-up, he still tries his best to spend time with his two girls, nine and 13, taking them out for activities on the weekends. He also enjoys cooking Indian and Italian dishes and whips up something on most weekends. "Cooking and spending time with my family is a great de-stressor for me, it keeps my busy mind off work," said Mr Roy.