KIEL/HAMBURG/BERLIN, GERMANY -  Newsaktuell - 19 January 2022 - More than ten years after the first edition of the World Ocean Review (WOR), maribus gGmbH and their scientific partners, the German Marine Research Consortium (KDM) and the Kiel Future Ocean Network, are publishing the next WOR that reviews the overall situation of the oceans. Its conclusion: only together can we achieve solutions for a sustainable future of the ocean by balancing protection and sustainable use. In order to achieve those sustainable solutions, important transformations in the way humans interact with the ocean must be initiated quickly. The new WOR is freely available to download and printed copies can be ordered. 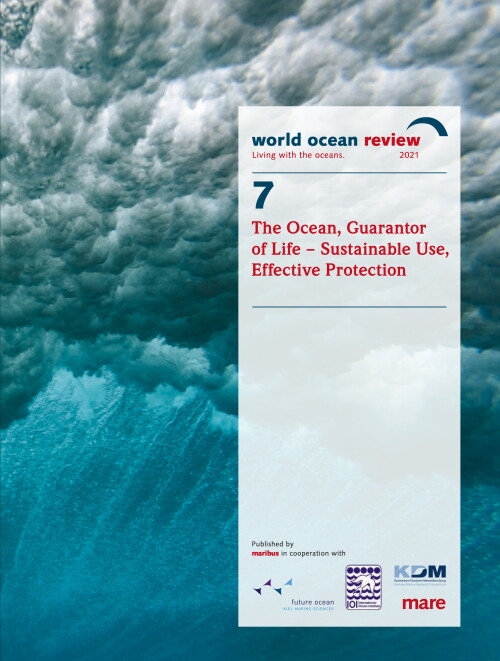 Language is generally an excellent mirror of reality. Moreover, if anything can be concluded more than ten years after the publication of the first World Ocean Review, then it is clear: the tone of the ocean debate has intensified. Where there was previously talk of ocean change, the dominant term is now ocean crises. We now speak of irreparable damage, the extinction of species, the ocean as a garbage dump, collapsing ecosystems and the destruction of millions of people's livelihoods already happening today and worsening in the future.

At the same time, politics, industry and science are promoting the ocean as a potential bringer of hope. Coastal States are keen on growing their maritime ('blue') economy and expect billions in profits from transport and trade, tourism, offshore wind power, aquaculture and the commercialisation of active ingredients from the sea. In the deep seas of the Pacific, mining companies are testing giant machines for the extraction of mineral-rich manganese nodules, and in the international climate negotiations, the carbon storage potential of mangroves, seagrass meadows, salt marshes and kelp forests is being promoted under the keyword "Blue Carbon".

Experts argue long-term prosperity form the ocean can only be secured if humanity transforms its business model towards the sustainable use of the ocean, minimizing pollution and destruction, protecting and restoring critical zones and paying attention to the limits of its capacity in order to safeguard long-term wealth, prosperity and a liveable climate in the future. Marine research in Germany and around the world has generated new knowledge in the last ten years, not only to describe the problem zones in the ocean, but also to develop potential solutions. On the question of how and when, it turns out that drastic changes are required essentially today.

This dilemma between the promise and reality of the human-ocean relationship is the focus of the seventh edition of the World Ocean Review. The new edition was first published in November 2021 in German and now translated to English by the non-profit organisation maribus gGmbh with the support of the magazine mare , the International Ocean Institute (IOI), as well as climate and marine researchers from the German Marine Research Consortium (KDM) and the Kiel Future Ocean Network.

"A science-based yet easily understandable, free ocean report showing the complex threats to the seas and potential solutions seemed a long-overdue necessity over ten years ago. Then, the ocean was predominantly seen as a medium for transport and tourism," said Nikolaus Gelpke, initiator and editor of the World Ocean Review, founder of the magazine mare , and director of the International Ocean Institute (IOI). "Due to the climate debate and the plastic pollution problem, the oceans have meanwhile moved into the broader view of the public, and therefore also of politics – and we are observing that the complexity of processes such as ocean warming or overfishing increasingly requires explanation based on facts. Against this background, the concept of the World Ocean Review has proven its worth."

The way towards sustainable use of the ocean

The seventh edition of the World Ocean Review focuses on the effects of climate change on the state of the ocean and its communities. Further topics are the consequences of rapidly increasing fishing, shipping, resource extraction, energy generation and marine pollution, along with questions of how the sea can be used more sustainably and how the ocean can be managed in the future so as to safeguard its eco-system function by both protection and equitable sharing of goods and services it provides. The new WOR offers integrated solutions for sustainable use of the ocean in all subject areas and provides best-practice examples. It refers to a variety of international marine protection agreements, which represent important instruments; although to date, their implementation has not been successful in many aspects. A new opportunity to improve the visibility of the ocean is the Decade of Ocean Science for Sustainable Development (2021-2030) declared by the United Nations general assembly. The UN has set itself the goal of increasing, combining and sharing knowledge in order to support the international community to implement more sustainability in the human-ocean relationship and establish binding measures to protect the oceans.

"In 2021 or in the first year of the UN Decade, one insight is important: the emerging global ocean crisis can only be contained with the active involvement of all social actors worldwide in sharing ocean knowledge – from scientist, governments, local decision-makers, to companies, civil society and to every individual. The foundations for a transformative transition from overuse and towards sustainable use of the ocean and seas need to be scientifically sound, easily understandable and comprehensive knowledge bases. And this is what the World Ocean Review offers", said Prof. Dr. Martin Visbeck, co-speaker of the Kiel Future Ocean Network and leader of the physical oceanography research unit at the GEOMAR Helmholtz Centre for Ocean Research in Kiel.

Setting the course towards protection and sustainable use of the ocean is a mammoth task, emphasise the scientific partners of World Ocean Review 7. However, they explicitly advocate for remaining confident and committing to innovative, transformative and collaborative engagement for a healthy ocean. "Management of the seas comes with the great responsibility of implementing scientific knowledge in such a way that the various demands from society, economy and nature conservation on the use of the sea are coordinated in such a way that the greatest natural treasure on Earth – the ocean – is preserved over the long term", said Prof. Dr. Ulrich Bathmann, director of the Leibniz Institute for Baltic Sea Research Warnemünde (IOW) and director of the German Marine Research Consortium (KDM).