In a series of tweets to his 25 million followers following charges from the US Securities and Exchange Commission earlier this week, Musk accused the regulator of failing to read Tesla's annual reports and said its oversight was "broken".

Overnight, he changed his display twitter.com/elonmusk name and added an elephant tag.

Shares of the company were up nearly 5 per cent at $312.15 in afternoon trading on Wednesday, after Musk said Tesla would have "news" at 2 p.m. California time on Thursday. 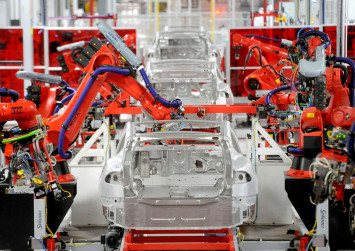 The company, which is deep in debt as it ramps up production of its popular Model 3 sedan, is due to repay a $920 million convertible bond a day later.

Convertible issues give bondholders the right to trade their debt for equity after shares rise over a certain price. Tesla shares are currently about $48 below the $359.87 conversion price.

Tesla had $3.7 billion in cash and cash equivalents at the end of December, according to the company's annual filing.

Musk had promised last year to have his public statements vetted by the company's board, as part of a settlement with the SEC that headed off demands for him to resign as Tesla CEO.

Tesla did not immediately respond to request for comment.