SEOUL, South Korea, June 13, 2019 /PRNewswire/ -- MINDs Lab is the first company in the world to develop voice filter technology. In October 2018, a technology capable of separating individual voices, even when multiple people are talking simultaneously, was mentioned in an article published by Google, but without mention of its creator. MINDs Lab is the first to have actually developed and publicly released the technology, based on open source content. 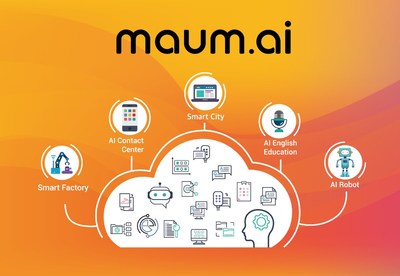 maum.ai, an AI service platform of MINDs Lab that was created using a diverse range of AI algorithms

MINDs Lab, a company that specializes in AI and a member company of the Born2Global Centre, announced that its Brain Team has become the first in the world to successfully develop voice filter technology. This technology is a deep-learning technology that is able to separate individual voices when multiple people are talking simultaneously at conferences or debates and is regarded as the most sophisticated technology of its kind developed so far. Google's October 2018 article, after being updated, now cites MINDs Lab as the creator of the technology.

MINDs Lab's voice filter technology has diverse applications in areas that require advanced voice recognition technologies, such as the automatic writing/sending of meeting minutes and establishment of smart offices. Based on this technology, MINDs Lab will be creating detailed plans for and pursuing the development of services that are in high demand (meeting minute service, AI hybrid customer service centers, etc.). In the near future, the company will also be developing various types of voice recognition solutions for use in areas/sectors that require multiple speaker voice recognition—something that was previously impossible due to technology limitations.

Separating the voices of two people who are talking simultaneously

Executive Director Chris Choi, the leader of MINDs Lab's Brain Team, said, "Voice filter technology has attracted a lot of interest since it was mentioned in the Google article last October, but we continued to have difficulties with our research because the related open source content had not yet been publicly released. The Brain Team is the first in the world to successfully test this technology and succeed in separating three voices." Choi added, "There is a huge demand in both the public and private sectors for automatic meeting minute write-up. Our relatively quick response to such demand was made possible by revolutionary R&D that enabled us to take one step closer to creating a more sophisticated form of voice recognition service."

MINDs Lab is a Korean company that specializes in AI solutions. MINDs Lab was included on a list of 10 breakout Korean startups that was published by Forbes Asia in 2017 and selected as the best and most innovative small and medium business at the awards ceremony of ITU Telecom World 2017, which was held by the International Telecommunication Union (an institution affiliated with the UN). In Korea, the company received one Prime Ministerial citation and three ministerial citation over four consecutive years. The company is also the only international member of Amii (Alberta Machine Intelligence Institute), one of the top three AI research institutions in Canada, a country that is renowned for the strength of its IT industry.

Born2Global Centre is a full-cycle service platform for global expansion. Since inception in 2013, Born2Global has been setting the standard for successful startup ecosystem as the main Korean government agency under the Ministry of Science and ICT. Born2Global has expanded and transformed startups to be engaged, equipped and be connected with the global market.