SEOUL, South Korea, Sept. 1, 2021 /PRNewswire/ -- MODAMODA Inc. (President Aiden Bae), a cosmetics and pharmaceutical manufacturer and distributor, has released its functional shampoo, "Pro-Change Black Shampoo," on Amazon.com in the United States and announced that it went out of stock within a day. 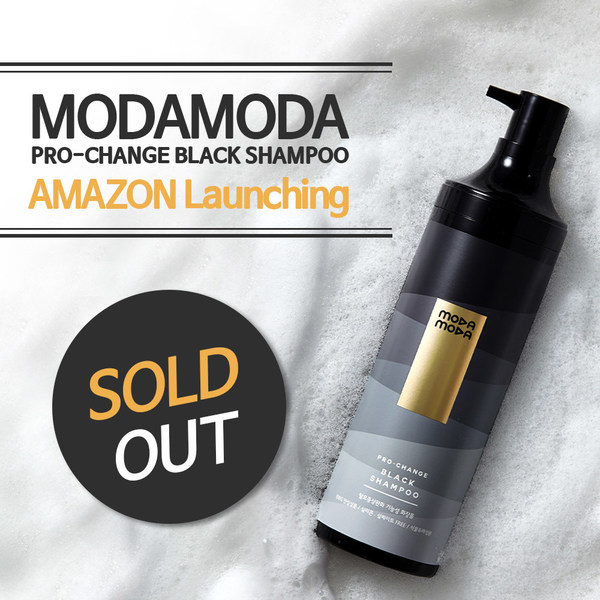 MODAMODA released its 1,000 initial product of Pro-Change Black Shampoo on Amazon. It is the second sale overseas after the Japanese Rakuten and Qoo10. The official selling price in the United States is $34 (10.5 oz, 300g).

"Following the last sales in Japan, Amazon sales were also quickly sold out, and we check the possibility of the MODAMODA shampoo in the US market. We are glad to offer the solution that is suitable for overseas consumers who feel uncomfortable using saline products due to scalp troubles such as allergies," said Aiden Bae, President of MODAMODA.

MODAMODA jointly developed Pro-Change Black Shampoo with Dr. Haeshin Lee (Ph.D.), an MIT chemist. It was designed based on the browning phenomenon of insects' self-healing substance and the Maillard reaction of fruits. Both processes involve the antioxidant principle, which is the complex ingredient of the shampoo that gradually darkens hair by reacting with oxygen and sunlight. Also, the product's primary raw material helps resolve middle-aged consumers' concerns by minimizing hair loss and boosting hair volume.

MODAMODA Inc. is a global haircare brand launched in April 2021. After five years of joint research and development with KAIST Chair Professor Haeshin Lee, we created an effective patented ingredient for aging hair. Based on this original technology, we launched the functional shampoo brand 'MODAMODA' in March 2021.

MODAMODA's first product, Pro-change Black Shampoo, was first released in the United States in June 2021. Then it officially launched in Korea in mid-July 2021 at department stores, supermarkets, and drugstore chains.