NUR-SULTAN, Kazakhstan, Nov. 30, 2021 /PRNewswire/ -- The Global Alliance of Leaders for Nuclear Security and Nuclear-Weapons-Free World (GAL) was held on the platform of the VI meeting of the Astana Club in the capital of Kazakhstan. 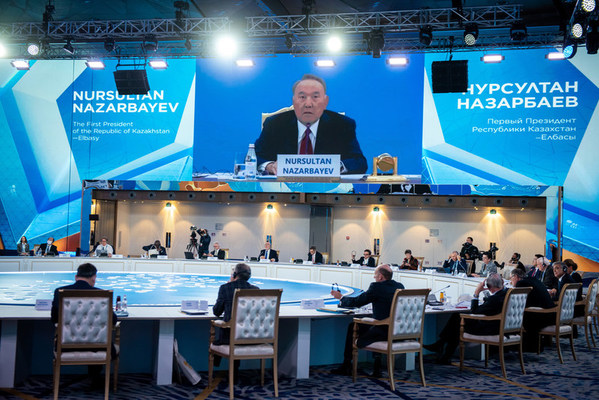 Nursultan Nazarbayev is addressing the members of the GAL session.

Addressing the members of the GAL, Nursultan Nazarbayev noted that negotiations on nuclear strategic stability on inter-state level are facing a stalemate, and there is a strong need for an alternative form of dialogue on this issue.

To break this deadlock, Mr. Nazarbayev proposed to set up the Global Forum on Nuclear Nonproliferation and Disarmament in the capital of Kazakhstan.

Forum should bring together all key international NGOs and world moral authorities in the anti-nuclear field to forge a unified global agenda.

In his statement Nazarbayev also called on the world community to develop a step-by-step Plan for a comprehensive reduction of strategic offensive arms with the participation of all nuclear states under the auspices of the UN.

Nazarbayev expressed confidence that the GAL can become the central platform and driving force in the development of this document.

Former UN Secretary-General Ban Ki-moon also addressed the Alliance members with the support of the Nazarbayev's initiative and noted that without the elimination of the nuclear threat, the world community will never be able to guarantee its security.

The address of the former President of the USSR, Nobel Peace Prize laureate Mikhail Gorbachev to Nursultan Nazarbayev and members of the Alliance became a significant moment at the GAL session.

Mr. Gorbachev expressed his full support for the initiative of the First President of Kazakhstan to establish GAL, noting that "there can be no other final goal than a world without nuclear weapons."

He also noted that the meeting of Joe Biden and Vladimir Putin in June this year in Geneva marked a positive trend. According to Gorbachev, it is extremely important that the meeting of two presidents reiterated the idea that "there will be no winners in a nuclear war," which was first voiced in 1985 at his meeting with US President Ronald Reagan.

The meeting of GAL was also attended by the leaders of the global anti-nuclear movement such as Nobel Peace Prize laureates Mohamed ElBaradei and ICAN Executive Director, Beatrice Fihn, as well as former UN High Representative for Disarmament Affairs and UN Under-Secretary-General Angela Kane, and many others.

All the meeting participants unanimously acknowledged that Kazakhstan, which voluntarily renounced the world's fourth largest nuclear military arsenal of 1,200 atomic warheads in 1990s, has the full moral right to undertake such global anti-nuclear initiatives.

This year's GAL meeting refers to the Doomsday Clock, the symbol of likelihood of nuclear war - One Minute to Midnight: Time for Action for the Nuclear Dialogue. This is because at the beginning of 2021, the Doomsday Clock moved the closest it has ever been in its history since 1947: 100 seconds to midnight.

GAL is a brand-new international platform created in 2019 on the initiative of the First President of Kazakhstan Nursultan Nazarbayev.

GAL's mission is to provide impetus to the anti-nuclear agenda through the joint efforts of the leaders of major international NGOs, well-known politicians, and world moral authorities in the anti-nuclear field.

In 2020, GAL's Open Call to world leaders to demand the need for strengthening joint efforts on nuclear safety, non-proliferation and disarmament was registered as an official document of the UN and the IAEA.

To date, the GAL is supported by over seventy prominent international figures, including politicians, experts, and Nobel Peace Prize laureates.