ABU DHABI, UAE, Feb. 17, 2022 /PRNewswire/ -- Archaeologists from the Department of Culture and Tourism - Abu Dhabi (DCT Abu Dhabi) have unearthed evidence of the earliest known buildings in the UAE and the broader region dating back more than 8,500 years — at least 500 years earlier than previously thought. 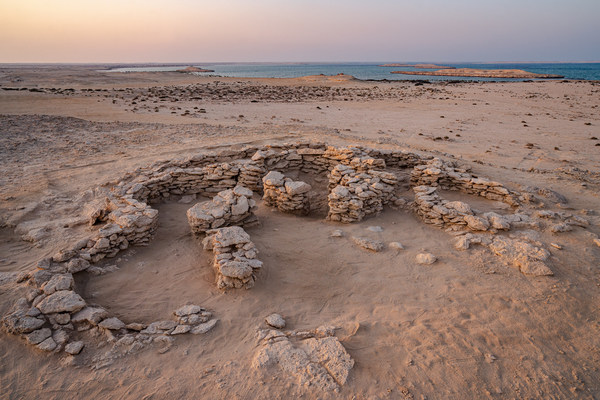 The discovery on the island of Ghagha, west of Abu Dhabi city, revealed stone structures offering further compelling history of the UAE.

The DCT Abu Dhabi archaeologists have been conducting scientific analysis of the artefacts since the structures and accompanying objects were unearthed. The most extraordinary discovery was revealed by carbon-14 analysis of charcoal fragments, which indicates the structures are at least 8,500 years old – breaking the previous record for the earliest known structures built in the UAE, which were discovered on Marawah Island.

It was previously thought that long-distance maritime trade routes, which developed during the Neolithic period, were the catalyst for settlements in the area, but the latest discoveries prove that Neolithic settlements existed prior to the onset of trade, which means it was local economic and environmental conditions that led to the first settled life in what is now the United Arab Emirates. Rather than being arid and inhospitable, the islands were in a sense a 'Fertile Coast'. This evidence recasts Abu Dhabi's islands within the cultural history of the broader region.

HE Mohamed Al Mubarak, Chairman of DCT Abu Dhabi, said: "These archaeological finds have shown that people were settling and building homes here 8,500 years ago. The discoveries on Ghagha island highlight that the characteristics of innovation, sustainability and resilience have been part of the DNA of the inhabitants of this region for thousands of years. The finds reinforce an appreciation of history, as well as the deep cultural connections between the people of the UAE and the sea. We are also reminded that there is still much to discover across the Emirate of Abu Dhabi, and that it is vitally important we continue working to discover, preserve and protect our invaluable heritage for current and future generations to learn more about our ancestral past."

Until the excavations of Ghagha, the earliest known structures in the United Arab Emirates were found on the island of Marawah, also off the coast of Abu Dhabi. Taken with the evidence from Marawah, the new evidence from Ghagha indicates that the islands of Abu Dhabi were a focal point for human innovation and settlement during the Neolithic period – a time of fundamental change throughout much of the world.

The structures that have been uncovered are simple round rooms, the walls of which are made from stone and preserved to nearly one metre in height. The rooms were likely houses for a small community who may have lived on the island year-round. Hundreds of artefacts were found in the rooms, including finely worked stone arrowheads that would have been used for hunting. It is likely that the community would also have used the rich resources of the sea. How long the settlement existed is unknown, but after it was abandoned, it apparently remained an important part of the cultural landscape, as nearly 5,000 years ago a person was buried in the ruins of the structures. It is one of the few burials from this period known on the Abu Dhabi islands.

The discoveries on Ghagha Island come as part of DCT Abu Dhabi's emirate-wide archaeological programme, in line with the organisation's mandate to preserve, protect and promote the ancient history and cultural heritage of Abu Dhabi. The emirate contains some of the most prized and unique cultural and historical attractions and finds in the region and internationally. In addition to the discoveries on Ghagha and Marawah islands, these include the remains of an ancient monastery on Sir Bani Yas island, as well as the UNESCO-inscribed Cultural Site of Al Ain, comprising a series of oases, historic monuments, archaeological sites and natural areas, which has featured on the UNESCO World Heritage Sites List since 2011.

Abu Dhabi's archaeological treasures also include Miocene Trackways (footprints of a herd of an extinct form of ancient elephant) which date to 6-8 million years ago; a 3,000 year old falaj in Al Ain (which indicates the earliest known widespread use of this irrigation technology in the world); stone tools dating to over 300,000 years ago, which were found in surveys around Jebel Hafit (indicating that the UAE was an important pathway for the dispersal of humans across the globe); and a well preserved Iron Age fortress dating to 3,000 years ago, which was discovered during excavations at Al Ain's Hili 14 archaeological site. A series of late pre-Islamic tombs have also been found in various locations in Al Ain. 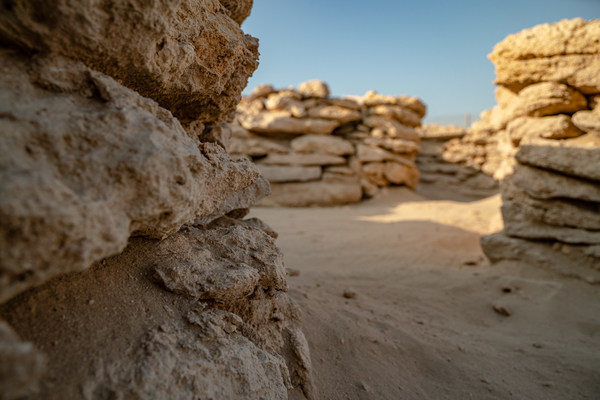