Next Meats completes development of three new products: "NEXT Pork", "NEXT Tuna", and "NEXT Milk", set for commercial release in October

TOKYO, Sept. 3, 2021 /PRNewswire/ -- Next Meats Co., known for the first ever plant-based barbecue meats "NEXT Yakiniku", as well as the beef bowl analogue "NEXT Gyudon", had announced the creation of their plant-based egg alternative "NEXT EGG 1.0" in June—and now have added pork, tuna, and milk to the list of their new animal-alternative products. 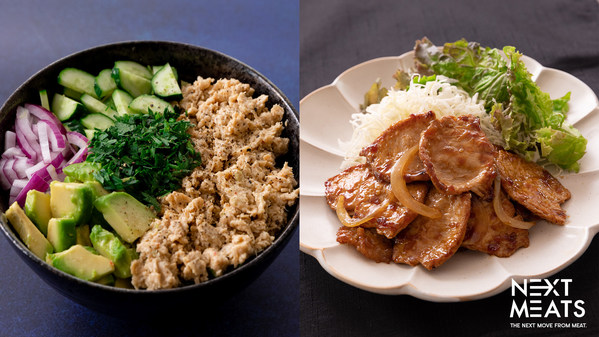 Next Meats' NEXT Tuna and NEXT Pork, to be released in October.

Ryo Shirai, (Co-founder of Next Meats Co. and CEO of Next Meats Holdings (OTC Pink: NXMH)) says they are thrilled to be able to respond to the myriad requests they had received from fans to develop a pork alternative, and to also release the company's first alternative fish product. In Japan pork is consumed the most out of all types of meat and seafood is consumed widely as well, so Next Meats believes the release of the NEXT Pork and NEXT Tuna is an important step towards a more sustainable future.

The NEXT Pork will be available as a ready-to-eat meal, with the pork sliced and sauteed in a slightly sweet but savory sauce consisting of soy sauce and ginger—just like "Shoga-yaki", a popular dish in Japan. Precise details of the NEXT Tuna and NEXT Milk will be announced at a later date closer to its release, but all products are scheduled to launch first in Japan around October through Next Meats' online shop.

Based in Tokyo, Next Meats is a food-tech venture company that specialises in the research and development of Japanese-style alternative meat products. Its journey of product development began in 2017, and the company was officially established in June of 2020. In December 2020 they announced their partnership with Toyota-Tsusho Corporation, and was listed on the American OTCBB in January of 2021. The company is currently rapidly expanding their presence to over 9 countries. They plan to research various types of alternative proteins in the future and aim to replace all animal meats by 2050.