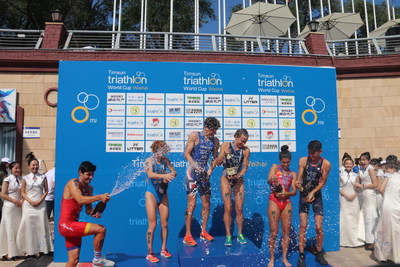 The number of countries and international athletes for this year's triathlon world cup were the largest in the history of the event, and the scores this year were also very high. Through fierce competition, Gustav Iden from Norway won the men's competition, and American athlete Taylor Spivey took first place in the women's competition.

"What a relief", said Gustav Iden after the completion. "I was very anxious before the game, and I didn't sleep well last night. So I'm very happy that I could do my best in the game. I think the design of the swimming race is terrific, and the track of bike racing is great, too. During the running race, I felt relaxed, and when I was on the second lap, I got a feeling that I wanted to win the game rather than simply achieve a ranking. I'm so glad that I made it."