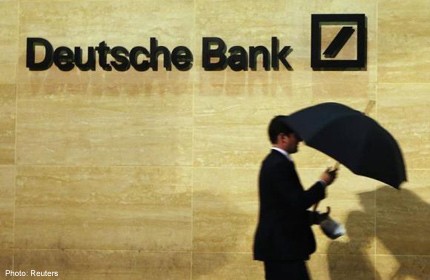 FRANKFURT- The Federal Reserve Bank of New York has found serious problems in Deutsche Bank's US operations, including shoddy financial reporting, weak technology and inadequate auditing and oversight, a person close to the matter told Reuters.

In a letter to the German lender's executives last December, a senior official with the New York Fed described financial reports produced by some of the bank's US divisions as "low quality, inaccurate and unreliable", said the source, who is familiar with the letter.

The New York Fed, as the US central bank's eyes and ears on Wall Street, directly supervises the biggest US and foreign banks, partly through embedded regulators who go to work each day inside the banks.

"The size and breadth of errors strongly suggest that the firm's entire US regulatory reporting structure requires wide-ranging remedial action," the letter, first reported by the Wall Street Journal, said.

Deutsche Bank shares lost 1.8 per cent in early trading, the biggest decliners on both Germany's blue-chip index and among the European banking sector, on fears that US regulators could take action against the bank.

"This seems to be a prelude for more trouble in the United States, making investors nervous," Kepler Cheuvreux analyst Dirk Becker said. "There's a lot of bashing of foreign banks to this, as the US tries to squeeze fines out of them."

Deutsche Bank said it is investing 1 billion euros ($1.35 billion) to upgrade its internal systems, including the quality of its reporting, with about 1,300 people working on the improvements.

"We have been working diligently to further strengthen our systems and controls and are committed to being best in class," a Deutsche Bank spokeswoman said.

Germany's largest bank has been in US regulators' crosshairs for some time over a host of issues, including investigations emanating from the financial crisis and criticism that it is too thinly cushioned against potential losses.

A US Senate committee this week accused Deutsche, along with rival Barclays, of helping hedge fund clients to avoid taxes and is also under investigation by US authorities over alleged sanctions violations.

Deutsche's capital strength had been under the spotlight since the vice-chairman of regulator Federal Deposit Insurance Corp, Thomas Hoenig, described the bank as "horribly undercapitalised" in an interview with Reuters last year.

The bank, like other foreign lenders, will come under closer scrutiny by the US Federal Reserve from 2016 and be required to retain thicker capital cushions to absorb potential losses and hold easy-to-sell assets so they can quickly raise cash in a potential new crisis.

The foreign lenders will also be included in the Fed's stress tests of banks' resilience to economic shocks.

The Dec. 11 letter from the New York Fed to Deutsche Bank said the bank had made "no progress" at fixing previously identified problems and ordered senior Deutsche executives to ensure steps were taken to fix the problems.

It also said the bank might have to restate some of the financial data it has submitted to regulators.

The New York Fed as well as the European Central Bank and German financial watchdog Bafin declined to comment.