The pre-payment, purportedly for the supply of bicycles, has not been returned, and letters of demands will be issued to oBike Hong Kong and founder Shi Yi regarding this, liquidator FTI Consulting said.

On Wednesday afternoon, FTI Consulting held a meeting at Shaw Tower, which more than 30 creditors attended, including oBike users with unrefunded deposits and companies which were owed money.

During the two-hour session, the majority of creditors voted to confirm the appointment of FTI Consulting's Joshua James Taylor and Yit Chee Wah as the liquidators for oBike.

Mr Taylor, FTI Consulting's senior managing director, told reporters following the meeting: "What we have found... is that the deposit holders' money came into the Singapore bank account and thereafter was transferred to oBike Hong Kong." 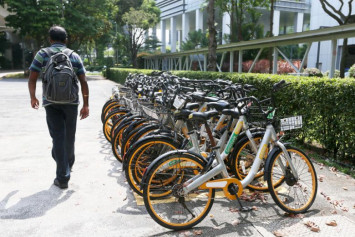 Under the accounts, oBike Hong Kong separately provided a loan to Singapore, he added. "What we've seen in the accounts and what they have done is netted off the two amounts to say nothing's owed," he alleged.

Mr Taylor said this was "not appropriate" and FTI Consulting will be looking at unwinding this transaction, to show that money is being owed to oBike Singapore and has to be paid back.

oBike ended its Singapore operations unexpectedly in June, after about 18 months of operating here.

In total, oBike Singapore collected $11.7 million from users here, which included deposits to rent the bicycles and usage fees.

Besides the $10 million transferred to Hong Kong, the remaining $1.7 million were used to refund customer deposits and for other operational expenses, Mr Taylor added.

The Chinese-founded oBike abruptly ceased operations in June this year (2018).

As of Aug 1, oBike users had filed claims of around $350,000 with FTI Consulting, according to a participant who attended the meeting. This is for deposits placed with oBike to use the shared bicycles.

More than $739,000 worth of claims have been filed by companies and organisations against oBike, such as vendors who provided bike collection and redistribution services.

The owner of one such logistics firm, who identified himself only as Mr Ong, said of the meeting: "It's a standard procedure we are going through. I'm not optimistic (of the outcome), unless the Government steps in and investigates... otherwise, oBike will just go down as a failed business."

Mr Ong said oBike stopped paying his company in April (2018), and would only say that the money owed is in the "five-figure" range.

Two other logistics firms present, which declined to be named, said they were each owed a sum in the six figures.

During the meeting, FTI Consulting said it will look into whether there were any financial breaches or lapses.

While they declined to discuss oBike's situation, observers said that in insolvency cases, there could be unfair preference, in which a firm transfers assets to a creditor shortly before it goes bust. In those instances, liquidators will have to claw back the money and apply to the courts if necessary.

This article was first published The Straits Times. Permission required for reproduction.