A glimpse of the visual & sound feast 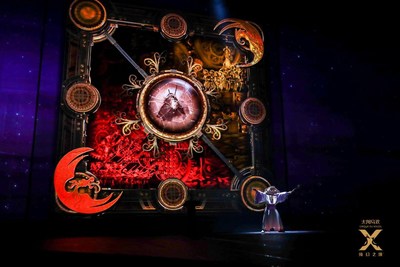 The highlight session of the Product Launch -- The Watcher and Box

The first stunning appearance of Hangzhou Suntaindy Theater, which is customized with cutting edge technology and amazing design, displayed the wonderful scene of Cirque du Soleil X 绮幻之境(X the Land of Fantasy). Just as its tagline "Striking at every moment," an unprecedented 360° immersive fantasy experience was brought to everyone from the beginning of the event.

The event completely demonstrated the uniqueness of the theater: the guests were seated on the seating wagon that represent two countries, which is the east and the west. With the rotation, they watched the main stage including the 100-meter-long Great Wall under the guidance of one of the main character of the show, The Watcher, as well as the 4 main performance areas. With the dazzling sound and light effects and exquisite props, the main scenes of "X绮幻之境" (X the Land of Fantasy) and the roles including King, Empress, Hero and Heroine, counselors, warriors, etc. are all presented in detail. Videos about theater construction, main creation team, and artists are also released. Hence, an amazing experience was presented from different aspects.

Since the Press Conference held last year, the storyline of X绮幻之境 (X the Land of Fantasy) has been well known to the public. This conference is an official "sneek peak" about the wonderful story, which almost restored the story about the Hero and Heroine were chased by the evil. In the middle of stage lift, Shadow Warriors and Hero & Heroine, their companies are confronting with each other, circus was redefined by the amazing and breathing taking Icarian performance.

After the wonderful performances, as one of the most important aspects of Cirque du Soleil X 绮幻之境（X the Land of Fantasy）product launch, the signing ceremony is also quite interesting. "X绮幻之境" (X the Land of Fantasy) announced that they will cooperate with Ctrip, Damai, Fly Pig, etc. on tickets selling. There are 6 different kinds of tickets, 380/480/680/980/1280/1680 Yuan, and on June 1st, the tickets will be sold on these platforms and the official website.

Nowadays, with the improvement of the consumption level of the Chinese people, the overall consumer market has been upgraded, which makes the spiritual consumption + service experience oriented become the trend. As a key tourist city in China, Hangzhou, which has its own profound cultural heritage, has also ushered in the rising popularity of cultural tourism and entertainment in recent years. The cooperation with mainstream OTA platform is relying on the overall consumer market, promoting Hangzhou culture and travel industry and Cirque du Soleil X 绮幻之境（X the Land of Fantasy）show.

As Suntiandy President Liu Wendong said in the conference, "It is believed that under the cultural tourism policy and joint efforts of platforms and media, this unique entertainment experience created by Cirque du Soleil and Hangzhou Suntiandy will become an important cultural symbol to realize the integration and re-creation of Chinese and Western culture and enrich the cultural heritage of Hangzhou." It is believed more in-bound tourists will be attracted, and its role as international tourism city will be also consolidated. Looking forward to the spectacular premiere of Cirque du Soleil X 绮幻之境 (X the Land of Fantasy) in August this year.