CHENGDU, China, April 24, 2019 /PRNewswire/ -- On April 23 the official mascot and logo for Chengdu Panda Asian Food Festival were unveiled after a 30 day appraisal and selection of over 1,000 entries. 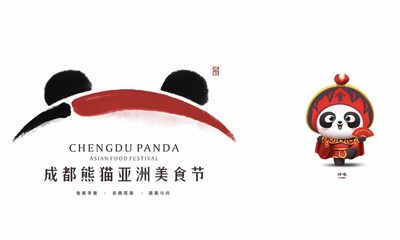 Selection was carried out among over 1,000 contributions in 30 days. The logo and mascot solicitation for the Chengdu Panda Asian Food Festival has received unprecedented attention since March 22.

In addition to a large number of excellent works from professional design institutions and individuals from all over China, foreign submissions from new Zealand, Malaysia, France, South Korea, Japan, Australia and other countries also participated with great enthusiasm. In addition, masters from the International Design Association, the Chinese Artists Association and the China Designers Association, as well as teachers and students from universities across China including Central Academy of Fine Arts, China Academy of Art, Sichuan Fine Arts Institute, Sichuan University, Jiangnan University, Suzhou University, Fuzhou University, Qingdao University of Technology, Sichuan Conservatory of Music, Xihua University, and the International Department of the College of Chinese & ASEAN Arts, all actively made their contributions.

The whole solicitation activity lasted from March 22 to March 31, with a total of more than 1,000 entries. After preliminary selection by the organizing committee, 628 entries were finally put on the official website for public voting on April 5. During the selection, the organizer avoided ballot rigging through measures such as wide media publicity, hiring professional and technical personnel, and organized experts and representatives of the organizing committee to review the entries, so as to ensure the openness, fairness and impartiality of the solicitation activity.

After a 6 day public voting and a 10 day professional evaluation by the jury, one gold award winner and four silver award winners were officially selected, with a 50,000 yuan and 10,000 yuan prizes were awarded respectively. According to the highest number of votes on the Internet, one online popularity award was chosen for logo and mascot each, with a 10,000 yuan prize.

The Food Festival solicitation activity witnessed inspirational ideas from all over the world, received the recognition of Tianfu culture from all walks of life, and felt the love of the public for Chengdu and its local food. These works depict the blessing to this gourmet and cultural feast with ink and color. The gold award winning works which incarnates the communication ambassador of the food festival and represents the overall image of the Chengdu Panda Asian Food Festival with ingenious ideas and clever designs will be fully applied to all promotion links of the Food Festival.

Chengdu Panda Asian Food Festival will be held from May 15 to 22 this year. During the festival, Chengdu will become a communication stage for cuisines and cultures from all over the world. With 45 events, including an opening ceremony, a food culture summit forum, a "cuisine-seeking trip" life aesthetic experience tour, two exchanges between Chinese and foreign famous chefs, four special exhibitions of food culture and eight national (regional) food theme days, the Festival will fully demonstrate Chengdu's long-standing culture and unique charm.

With the charmingly naive panda and fascinating cuisine combined together, the Festival fully embodies the most sincere wishes and precious cross-board friendship and sends invitation to the whole world for a visit of cuisine and culture. On May 15, we are waiting for you at the Chengdu Panda Asian Food Festival in Chengdu.