Just a few days ago, we got confirmation that Pablo's first (and remaining store) in KL was shut down permanently.

A few of our office break time discussions have tossed about reasons why Pablo may have shut down in Malaysia after just 2 years in operation, so we've decided to put together an article on the possible reasons behind the closure.

Pablo opened to a fair amount of fanfare and pomp, and there were often long lines snaking out of its 1 Utama outlet in the early days.

However, there actually is a lot of competition in the industry with many brands leveraging off the cheese tart craze. For a start, there are quite a few who've built their branding around Japan-themed cheese products such as Hokkaido Baked Cheese Tart, Tokyo Secret and Uncle Tetsu. 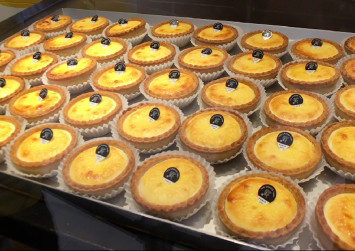 Hokkaido Baked Cheese Tart and Tokyo Secret have also established a presence in the local market for a longer time.

Other than that there are smaller brands out there that do serve cheese tarts though that's not their main focus-John King, Lavender, Happy Happy Bread Bakery and Tedboy Bakery.

Thus, the competition is huge, and faced with the abundance of choices, consumers will make their decisions on which brand to buy from based on a few factors, which are as follows.

Pablo's price tag is actually one of the most expensive for a cheese tart of that size in Malaysia. Their "mini" Pablos cost RM8.90 (S$3); their larger tart which they are famous for costs a whopping RM45.90 (S$15.45)!

And it's not just their tarts that are more expensive; the other offerings on their menu weren't cheap either.

Their soft serve ice creams are priced at RM11.90 and that is the cheapest thing on the menu other than their cheese tarts!

They clearly stand out for being the most expensive of the known tarts. If they price their tarts so high, their quality should at least taste better, to justify the pricing, shouldn't it?

3. Lacking Taste And Quality (To Match The Price)

Even though they are famous for their cheese tarts, there were quite a few comments online where customers have complained. It goes to show that some customers don't think the price they are paying is justified.

It's also possible that their flavour offerings and textures weren't suitable to the mass local palate.

However, there were also a fair few customers who tried the original Pablo from Japan, and felt that it doesn't taste the same or as good. This could also potentially be psychological, or even weather-related, as Malaysia's humidity does play its part in affecting the baking process.

To put things into perspective, these negative reviews are just a small percentage what as I found out after scouring the internet. They do get positive reviews most of the time; their score on Google-4.6 stars and TripAdvisor-4.5 stars do show that they had their fair share of fans.

But it is possible once the hype had died down and the crazy lines in front of their stores disappeared, the lower volume was not able to sustain their business.

Pablo's rate of expansion was pretty slow compared to other brands. And if you wanted Pablo, you only had a choice of two locations to get it from.

If they covered more shopping malls that have high foot traffic they might have been able to get their name and branding out more.

Although they had a good location at One Utama, their other location at IOI City Mall Putrajaya meant that they weren't as much in the public consciousness of Klang Valley or KL-ites, as the other brands.

On top of that, they only opened their Putrajaya outlet in the middle of 2017 and it only lasted a year before they closed down.

Taking into account just 2 competitor brands: Hokkaido Baked Cheese Tart have over 50 locations in Malaysia and Tokyo Secret has 13 outlets. Pablo pales in comparison to them with only 2 outlets, at its peak.

The Pablo stores both shut down within a month of each other, and there was barely any sound from the public.

This is an indication that they didn't make enough of a mark on the people to even be missed much when they're gone.

That's probably the most damning reason behind their shutdown. After all, if people just like you enough to occasionally buy your products, but don't really care if you're around or not, then that's an indication that you are probably going to be easily replaced.

At the end of the day, Pablo probably lost the cheese tart war because of their pricing and lack of access. After all, those are key factors we Malaysians will use to decide on which product to buy, especially when it comes to food.

When it came to taste, they may have been good enough, but how much did they stand out from the other options easily and readily available?

For other brands looking to establish a foothold here, if you want to survive in Malaysia, don't price your products so high that the average Malaysian will look at it and think it's too much for their wallets.

If you do, you had better have some other drawing factor to bring those customers, not just once, but regularly to your stores.

After all, you don't want to be remembered like Pablo Malaysia is, as summed up by this netizen:

I remember the price more than the taste.