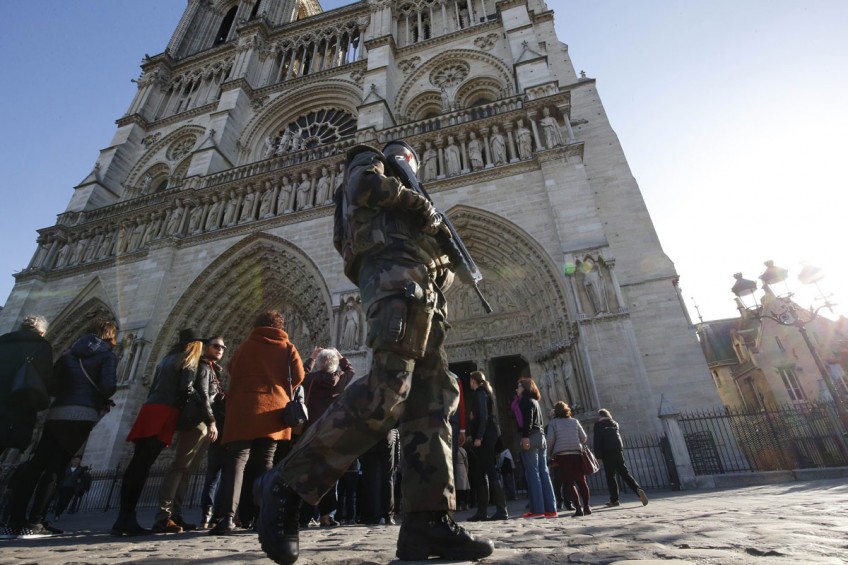 Security officers stand guard next to the entrance of Notre Dame cathedral in Paris.
AFP

Bourses across Asia including Singapore are likely to see a sell-off at the start of the trading week after deadly terrorist attacks across Paris on Friday killed 129 people.

Markets are poised for a soft opening, with Wall Street closing more than 1 per cent lower after weak US retail sales figures, and after China's fresh moves to tighten margin financing announced on Friday, which is likely to weigh on investor sentiment.

The Paris violence is likely to exacerbate already weak market sentiment, with the Straits Times Index's (STI) immediate support seen at 2,900, remisier Alvin Yong said. But the expected sell-off "is a knee-jerk reaction and likely to be temporary", he said, adding: "It should eventually give way to bargain hunting."

French President Francois Hollande has declared a state of emergency, ordering police and troops into the streets, and set three days of official mourning in the wake of the attacks he called an "act of war" by the Islamic State in Iraq and Syria militant group.

But even before the deadly attacks, Singapore's stocks were hit on Friday after China raised margin finance requirements in a bid to prevent systemic risk, and following a recent rapid recovery in margin financing activity.

Chinese stock index futures slid after the country doubled margin requirements for stocks trading - cutting in half the amount of borrowed money investors can use to buy shares. Margin requirements will be raised to 100 per cent from 50 per cent starting on Nov 23, the Shanghai and Shenzhen bourses said in separate statements after local exchanges closed on Friday.

"Downside bias for Singapore shares is expected to continue this week depending on how Chinese equities perform," Mr Yong said. "The Chinese government recognises that wild and excessive margin lending is a systemic risk to the stability of financial markets, and wants to prevent another meltdown."

Sentiment will likely be influenced by Singapore's October non-oil domestic exports (NODX) due to be released tomorrow, and third-quarter gross domestic product numbers on Wednesday.

Investors are also expected to watch for the US Federal Reserve's FOMC (Federal Open Market Committee) minutes, to be released on Thursday morning local time for further clues on the first rate lift-off.

"A rate hike starting in December is a foregone conclusion. Investors should focus on the more important question of the pace of rate hikes after the first one," Mr Yong said.

The weak third-quarter performance by a number of blue chips including Genting Singapore, Noble Group and Neptune Orient Lines is thus likely to spell further downside for the local bourse.

"STI is likely to trade range-bound with downside bias until positive news emerges from the global economy," Mr Yong said.

"Given the disappointing performance of the US market so far, traders are looking forward to any hints of further stimulus from ECB, BOJ and PBOC," he said, referring to the European Central Bank, Bank of Japan and the People's Bank of China.