"Part time for 2035" for Unemployment Issues to Put on Christmas Eve Performance at Times Square, NYC

NEW YORK, Dec. 20, 2018 /PRNewswire/ -- "Part time for 2035" will be hosting a performance on Christmas Eve (December 24, 11:00 am ET) in Times Square, NYC, calling for public attention to unemployment issues. Performers such as DP. Haejong Gwon, NY Cable TV announcer Jihye Choi, Model/Actress Katya, and other performers will be participating in the event. At the same time, Korean entertainers, such as Singer Ji-heon Park, MC Seung-joo Baek, Speaker Dong-jun Park for temp-worker, Actress Jina, Actor Ryan Kim, Actress/media artist Sora Kang, and other performers will participate in an event in Seoul, Korea, also calling for public interest in unemployment issues. The two events will be aired lived on Facebook page (www.facebook.com/parttime2035). For the Times Square performance, 300 Christmas candy and chocolate baskets have been prepared for participants. In addition, those participating in the photo zone will receive coupons for Starbucks, which recently announced that it will eliminate disposable plastic straws from all of its branches around the world by 2020, redeemable in Starbucks stores in the United States. 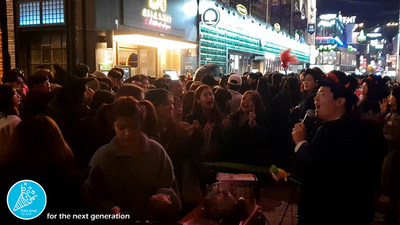 Regarding the Christmas events, Joseph Kim, an official for "Part time for 2035" explained: "The current unemployment issue isn't a problem that arose in the recent years. It is a problem for the whole world that cannot be solved in one day. Unemployment issues affect income and consumption, create poverty, and eventually affect the general society and economy. When you look around, there is at least one person suffering from unemployment, which shows that it is not a problem that only a few are suffering. I hope that everyone can at least have a little bit of interest in the unemployment problem. For the event in Korea, Golden Package-kr, Dilly Beez, an environmentally friendly Korean company, will be sponsoring plates and bowls, coffee cup lids, and to-go boxes made with paper enough to be used for a year with the intention to help low-income workers to save time from washing dishes in the morning and the evenings, and encourage them to devote that time to working or taking a break. Although these are trivial matters, in today's cold and harsh reality, these might be presents that some people might need. I hope that with everyone's interest in unemployment issues, the end of 2018 and the beginning of 2019 will be a little warmer for all of us."

"Part time for 2035" calls to improve the unemployment situation and believes that with active participation of sponsors will vitalize companies, which in turn will create job opportunities, thereby realizing the purpose of "Part Time For 2035". To this end, various programs are currently being offered. Currently, T Public Service cooperates with anti-plastic, eco-friendly venture-backed companies and will expand its activities to include other environmental issues and sectors. It also offers programs to provide support for young people in various promising sectors that have the potential to develop into something great even with the smallest support, This year's performances will be sponsored by Golden Package-kr, Dilly Beez, Otophagy, Toktak-kr, Glovistar, Sunjin Cosmetics & Tradings U.S.A. LLC, JML Photo & Video, and other companies.