JAKARTA, Indonesia, Dec. 28, 2021 /PRNewswire/ -- Amid the Covid-19 pandemic, PT Pertamina (Persero) continues Environmental, Social & Governance (ESG) aspects implementation while carrying out the energy transition agenda as the focus of attention of World Leaders at the COP26 meeting in Glasgow, early November 2021. World leaders conveyed the importance of real and serious actions that can be implemented and credible planning targets to tackle climate change. 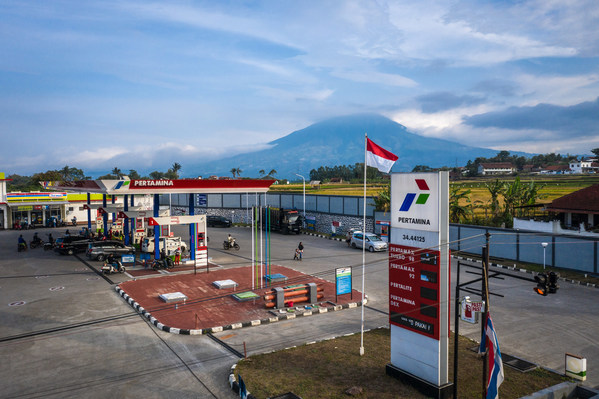 In the Pertamina Energy Webinar (PEW) 2021 which was held virtually with the Energizing Your Future theme, Vice President of Pertamina Energy Institute (PEI), Dr Hery Haerudin said that currently the earth's temperature has reached 1.2oC and is predicted to reach 1.5oC in 2050. According to him, the steps that have been taken by the world leaders and many countries are not enough to fulfill the emission reduction target. Of course, this will have a tremendous impact on the environment, such as CO2 raise in the atmosphere, shifts in rainfall, rising sea levels, and various more extreme things such as floods and heatwaves.

"Therefore, we need a comprehensive plan or foresight that we can utilize to assure how global warming does not go past the 1.5oC which we do not want and keep climate change to a minimum," said Hery.

To answer these challenges and targets, Pertamina Energy Institute has conducted an academic challenge through the Pertamina Energy Outlook 2060 (PEO) which shows three scenarios that the energy industry can execute in Indonesia, in which the scenarios are prepared from the point of view of the energy transition forward. Through this PEO, Pertamina can make solid plans to address business continuity and predict long-term needs. Even the community can participate in taking part in realizing Indonesia's achievements in the future and mitigating risks that will arise.

Hery Haerudin revealed that for the preparation of the energy outlook and predicting long-term energy needs, the economic conditions and the user community need to be considered. In the short-term projection, Indonesia's economic growth this year is estimated at 3.63% and next year it is estimated at around 4.55%. However, in the long term, Indonesia's economic growth is predicted to decline to around 2% in 2060. This decline occurs as a result of slowing growth in productivity and consumption levels which are in line with the rate of population increase.

"Pertamina Energy Institute has submitted 3 (three) scenarios, that are Low Transition, Market Driven, and Green Transition. In those three scenarios, PEI has accommodated all business potentials such as electric vehicles, the use of biofuels, electrification in both the industrial and household sectors, the utilization of renewable energy, the utilization of hydrogen and other energies," he said.

"The Indonesian government has announced to achieve Net Zero Emission (NZE) by 2060 or even sooner. How can this be realized? Based on the trajectory, the scenario that can achieve the Net Zero Emission target in 2060 is the green transition scenario," said Hery.

In this trajectory, emissions will peak in 2030 at 670 million tons of CO2e and will continue to decline to 270 million tons in 2060. Therefore, by looking at this trajectory, in 2060 a carbon sink will be needed for carbon absorption from the AFOLU sector (Agriculture, Forestry, and Land Used) of 270 million tons so that we can reach NZE. This indicates that the importance of Nature-Based Solution (NBS) in achieving NZE. Carbon absorption does not have to always rely on the forestry sector, it can also use other carbon absorption such as CCS or CCUS, but so far the costs are relatively expensive, and the exact calculation of the amount of carbon that can be absorbed is a hindrance to implement this technology on a massive scale.

For this NZE target to be achieved, said Hery, solid cooperation is needed between the Government, entrepreneurs, and various sectors in the society, as well as the energy sector. In Indonesia, it can be seen that emissions from the transportation, power plants sectors and industry are the biggest contributors to emissions, both in low transition and market driven. Industry produces emissions for production and processing needs. Changes towards a low emission industry will require adjustments from technology and others. Seen from the power plants and transportation sectors, Indonesia has a huge opportunity to reduce carbon emissions massively, by increasing the penetration of power plants from New and Renewable Energy (NRE) and the penetration of electric vehicles usage.

In the green transition scenario, the primary energy that is most affected by the decline during the transition is oil and coal, due to an increase in electrification. Even in 2060, gas will be used more for the industrial sector as a feedstock. NRE will continue to increase significantly until it increases 71% in 2050. And in 2060, there will be a big change, where fossil energy only remains 18% while NRE reaches 82%.

"Of all primary energy, gas is the only fossil fuel which usage is the most persistent for a long term, compared to oil and coal. There is potential in the future with the high demand for this gas, domestically produced gas production will no longer be able to fulfill the needs," he added.

Moreover, Hery added that in the future electrification will make contact with all aspects of life and become the new norm. All sectors will use electricity for daily needs, the number of electric vehicles will continue to increase. In the energy transition scenario, in 2060, it is predicted that almost all vehicles driving on the road will be electric vehicles. Likewise with electric stoves, because their usage is driven by a conversion/electrification policy. In the industrial sector, electricity will also be increasingly used to reduce carbon emissions.

To achieve carbon neutrality in the power generation sector, there are variations from the carbon-neutral scenario in 2060, either using 100% renewable energy or a combination of renewable energy and fossil energy equipped with CCS/CCUS. All scenarios until now are still possible because each scenario has a dependency on technology. Furthermore, there is the potential for an increase in electricity prices from each selected scenario. For this reason, several things are needed to maintain the positive socio-economic impact, such as incentives, both fiscal and non-fiscal, access to economical and credible funding, and massive development of a reliable electricity system.

Regarding the COP26 agreement, said Hery, Indonesia already has regulations, namely Government Regulation No. 46 of 2017 regarding Environmental Economic Instruments which includes Tax basis and market basis, and Presidential Regulation No. 98 of 2021 which contains carbon trading, results-based payments, carbon taxes, and other mechanisms.

To make the energy transition successful in Indonesia, Pertamina Energy Outlook recommends the need for a national level institution that has a special function to collaborate with all stakeholders to achieve the desired goals. The development of an energy transition ecosystem also requires policy, planning, identification of potential projects, and also includes supporting infrastructure and industries. And then, the development of carbon markets and the determination of carbon prices that have a positive impact on socio-economic conditions.

In addition, new technologies also need to be commercialized immediately on a massive and economic scale. For instance, low carbon hydrogen and the utilization of CCS/CCUS as long as it fulfills the economic value. An assessment of the potential quantity and quality of NRE energy resources needs to be carried out to support the achievement of emission reductions. Other things that need to be done are capabilities enhancement in conducting MRV, market monitoring, and providing a liquid carbon trading infrastructure to be able to meet NZE targets while at the same time monitoring international carbon trading opportunities.

What is certain, said Hery, is that energy transition will require huge funding, and cannot be obtained only from domestic sources of funds, but also requires foreign assistance through existing and agreed programs.

"The benefits of the carbon tax must be utilized for climate mitigation and adaptation programs such as the use of renewable energy, job opportunities, poverty alleviation and reducing disasters impacts, as well as energy and food security," concluded Hery.