Peter Sun Talks About Next Technological Revolution at Boao Forum for Asia, Saying ABC to Change Every Area Deeply

BO'AO, China, April 10, 2018 /PRNewswire/ -- Peter Sun, Chairman and CEO of Inspur Group, spoke at the Next Wave of Technological Revolution session of the Boao Forum for Asia Annual Conference 2018 on the afternoon of April 9. He said that technological changes are creating new growth drivers, business forms and industrial models. The next technological revolution led by ABC (AI, Big Data and Cloud) will change every area deeply. 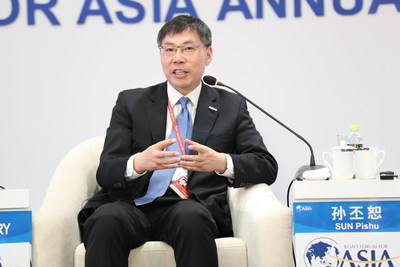 Peter Sun, Chairman and CEO of Inspur Group, speaks at the Next Wave of Technological Revolution, a session of Boao Forum for Asia Annual Conference 2018.

According to Peter Sun, ABC constitute an iron triangle where the 3 closely connected technologies promote each other. ABC will become 3 critical development areas in the next technological revolution. Like water, electricity and gas, cloud computing will become a basic resource for society, making computing power stronger and ubiquitous with lower costs. And cloud computing will facilitate the production of big data. Big data will become the source of intelligence as well as the soil for new economies and business forms. Based on cloud and data, as the most typical technical application of new era, AI will become the key to the next wave of technological revolution. In 10 years, AI will be involved in almost all the applications and services. It will be applied to every aspect of our life, driving the construction of intelligent scenes of every industry and area.

As a leading cloud computing and big data service provider in China, Inspur has built 5 core cloud data centers and 34 municipal cloud data centers, providing cloud services for 138 provincial or municipal governments and thousands of large enterprises in China. Inspur has helped more than 40 provincial or municipal governments in China build big data platforms and has made over 20,000 government data catalogs. In the AI computing area, Inspur occupies over 60% of Chinese market and supports 90% of AI computing for Baidu, Alibaba and Tencent.