Players can join the "Birthday Tour" event from May 31 through June 21. Full of twists and turns for a limited time new update, players will travel around the world by car, playing to collect vehicle upgrades, postcards that unlock rewards, and special Lucky Draw cards to earn prizes, all while meeting other global players and making friends as you travel together.

"Fans can expect the game to keep evolving as we continue to develop new modes of play for Phase 10: World Tour," said Phase 10 creator Ken Johnson. "We've collected feedback from fans over the years, and have used that knowledge to develop new ways of playing the Phase 10 game, and I hope its popularity will continue to grow for both the physical game and the mobile app."

"Phase 10 has remained a beloved source of entertainment and fun across generations, and the 40th anniversary celebration is one of the biggest events of the year for Mattel163," said Amy Huang, CEO of Mattel163. "We're very excited to be part of the journey and Phase 10 Mobile will evolve to provide more personalized and localized in-game experience in countries across the world, allowing global players to enjoy the fun and love of making a phase."

In 1982, 22-year-old Ken Johnson created the classic rummy-style Phase 10 card game, in the basement of his parents' Detroit home.

Phase 10: World Tour is available in over 100 countries on both iOS and Android, and has amassed tens of millions of players around the world. It's always a good time to take 10; download Phase 10: World Tour on the App Store or Google Play now and take 10 for yourself! 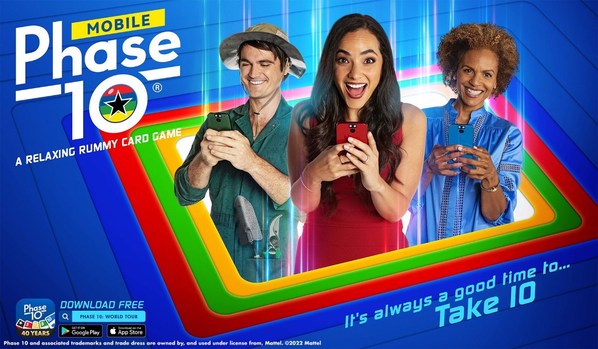 Mattel163 is a joint venture between global toy giant Mattel and Chinese internet giant NetEase. Founded in 2017, Mattel163 employs over 200 talented people with offices in Los Angeles, Shanghai, and Hangzhou. Focusing on connecting the world through play, we develop and publish mobile games based on iconic Mattel IPs and our own original creations.

Mattel163 has more than 250 million players around the world, and is growing! We believe that games are about creativity and connectivity that should evolve with technology and culture. Our current game portfolio includes UNO!™ Mobile, Phase 10: World Tour, Skip-Bo™ Mobile, and more to come very soon.