Covering over 1000 ha in northern Phu Quoc Island, Vingroup's new "tourism-entertainment universe" is said to be comparable to global tourist hotspots like South Korea's Jeju, Singapore's Clark Quay, or Las Vegas in the US.

Vietnam's largest bamboo construction - Bamboo Legend - was designed by world-acclaimed architect Vo Trong Nghia and built from more than 32,000 bamboo trunks. Its dome patterns reflect the communal house in Vietnamese villages - a unique, recognizable national trait. Right next to the Vietnamese national pride Bamboo Legend is the world-renowned Teddy Bear Museum. This 1500-square-meter museum is the eighth version of its kind in the world and the very first in Vietnam, housing bears of all kinds and all sizes that can thrill everyone from the very young to the young at heart. 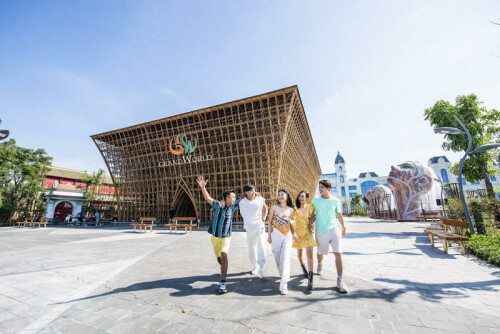 The show "The Elite of Vietnam" has been recognized as 3D multimedia show with the most Vietnamese historical references. Comprising nearly 3000 daytime mini-shows and 365 nocturnal events each year, "The Elite of Vietnam" relives Vietnamese lifestyles, tradition and history of ancient times in a citadel, conveying compelling cultural messages. State-of-the-art technology and visual effects incorporated in these shows have embellished Vietnamese culture in the modern entertainment world.

"The Color of Venice" super show holds the record of Vietnam's largest floating multimedia show inspired by European culture. With a 15-thousand-square-meter underground stage and the most advanced equipment for performance, this is one of the most satisfying multimedia shows in Vietnam, recreating an idyllic and picturesque Venice through Valse dances, lighting, music and performances on the water surface that can be found nowhere else.

A fitting end to the show trilogy in Phu Quoc United Center is the world-class light water show, called "Once Show" arranged and performed by famous Quantum Creative Studios. Worth 12 million USD, "Once Show" is a breath-taking world a fairytales made from water, lighting, fire, ice, 3D mapping. 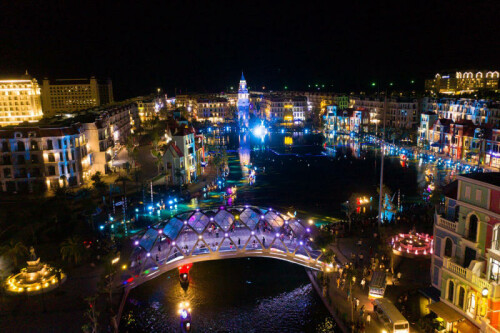 These non-stop million-dollar shows and 1000 shophouses create a 85-hectare Grand World with various activities all day and night. In this place, the boundaries of time and space seem to blur as visitors embark on a journey from the ancient Vietnamese citadel to a magnificient Venice, from a bustling Shanghai to the Urban Park of contemporary arts, from the splendid Phu Quoc Night Market to a lively tropical square... This is the destination where tourists can eat, play and buy anything in the world from a series of restaurants and shopping streets teeming with domestic and international brands. Grand World's entertainment zone, bars and clubs as well as Corona Casino also offer various unforgettable moments.

All these are included in Phu Quoc United Center - the very first super resort-entertainment-tourism complex developed as a one stop destination in Vietnam. With exceptional services and distinctive experiences, this all-in-one tourism universe has laid a firm foundation for the night-time economy in Vietnam.