PIE International announces an unprecedented dinosaur art book, The Art of the Dinosaur by the most talented paleoartists in the world

TOKYO, Oct. 19, 2017 /PRNewswire/ -- PIE International Inc., an art book publisher based in Tokyo, announces an unprecedented dinosaur art book, The Art of the Dinosaur: Illustrations by the Top Paleoartists in the World, a collection of stunning illustrations by nine of the world's most accomplished paleoartists today. 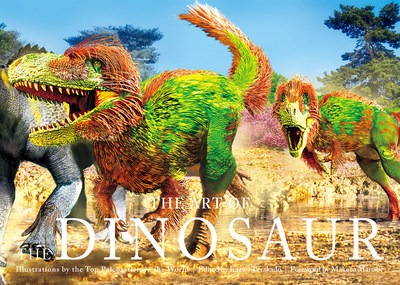 Cover Design "The Art of the Dinosaur"

The artists in this collection present a selection of their works that show not only the dynamism of this artistic genre, but also the great detail and individual technique of each art work itself. The artistic renderings are the result of collaborations with paleontologists and are based on the most recent discoveries. These astonishing images of dinosaurs will overturn our conventional ideas about them.

James Kuether, a Minneapolis, Minnesota-based artist has commented on the title as follows:
"This collection beautifully presents the diversity of art and artists working in the field today while it celebrates the critical role that paleoart plays in the science of paleontology. More and more, paleontologists rely on artists to help communicate important findings to the public and to generate excitement and interest. Occasionally, the art itself can help inform the science, as artists work with paleontologists and speculate about appearance and behaviors that can prompt new lines of inquiry and research."

In addition to their artwork, each artist's section contains their own words about their professional focus, their methods and techniques and how they became fascinated with dinosaur art. This book has been edited by Kazuo Terakado, a renowned Japanese science journalist, and at the end of the book is his interview with Dr. Makoto Manabe, a prominent paleontologist that gives a solid history of the depiction of dinosaurs. Dinosaur fans, fantasy art fans as well as 3D art professionals and students will enjoy exploring the world of dinosaur art today with this book.

An author, editor and illustrator. He is an award-winning artist whose paintings and photographs hang in galleries and private collections around the globe. He is an amateur fossil hunter and a life-long dinosaur enthusiast. His natural history art has appeared in numerous publications and accompanies museum displays in the United States and Europe. His first book The Amazing World of Dinosaurs, features more than 160 original illustrations, and was published by Adventure/Keen in October 2016.

An American scientific illustrator best known for her reconstructions of feathered dinosaurs, both living and extinct. Her work has been featured in a variety of forms, online and off, including the National Geographic Society, the Denver Museum of Nature and Science, the Shanghai Natural History Museum, and in various paleontological research reports in journals such as Evolution and Nature News. Her first book, a recently released coauthored work featuring a series of her paintings of feathered dinosaurs, is relevant in the context of evolution/creation controversy in the US. Emily enjoys working in a variety of media, from digital painting to acrylics, oil, gouache and watercolor paints to bird photography. As a result of her background in biology, her primary focus is the fusion of research, realism and aesthetics in artwork. Emily lives in Minneapolis, Minnesota, where she is studying for a Ph.D. in behavior genetics.

A Spanish-Mexican artist. He has a master's degree in visual arts from Academy of San Carlos, National Autonomous University of Mexico in 1977. He began his career as a symbolist, hyperrealist and surrealist painter and sculptor. A dinosaur fan from the age of three, he rediscovered dinosaurs after the dinosaur renaissance in the late 1980s. He then began to study paleontology in depth to prepare for his updated and revised reconstructions for publication in popular books. His work took him around the world for research and for meetings with top paleontologists. He has co-published with several of these experts. He is currently working with Stone Company and Gondwana Studios creating murals for exhibitions.

A Chinese science artist and co-founder of PNSO, a world-class scientific art research institution. Since 2006, Zhao Chuang's artworks have been published in prominent academic publications such as Nature, Science and Cell. He collaborates with dozens of leading scientists from research institutions including the American Museum of Natural History, the University of Chicago, and the Chinese Academy of Sciences, the Chinese Academy of Geological Sciences and Beijing Natural History Museum, working in their paleontology research projects and providing artistic support for their fossil restoration works.

He has been working as a medical and scientific illustrator for more than 15 years, combining scientific research and visual communication. In 2007 he became a full-time paleontology illustrator and digital sculptor, and he has won prestigious international awards including the Lanzendorf PaleoArt Prize. Cooperating with paleontologists worldwide on prehistoric model reconstructions and settings, he has displayed his work in museums, exhibits and theme parks, and has published them in scientific and educational magazines, including National Geographic. His illustrations are featured in the traveling exhibition "Dinosaurs in the Flesh."

A freelance paleoartist, lives in the Donbas in Ukraine. Born in 1975, he is a graduate of Lugansk Art College. He creates pale illustrations for a number of publishers. He has worked with a number of paleontologists, including Christophe Hendrickx from Portugal. Four years ago he switched to a graphics tablet for greater time economy, but he still uses traditional art media upon request and at times for pleasure.

A paleoartist and a graduate in industrial design. He developed and published a scientific methodology, Paleodesign, for restoring extinct animals. He has worked in museums in Brazil, Argentina, Spain, the United States, Portugal, Germany and Georgia. With more than 15 years of experience in artistic illustration and 10 years in scientific illustration His illustrations have been printed on Brazilian postage stamps and in the Dinosaurs of Brazil line of toys. He has published illustrations in textbooks, scientific journals (Plos One, Cretaceous Research, Journal of Vertebrate Paleontology, and others) and in magazines such as Scieintific American, BBC and National Geographic. He currently leads Prehistoric Factory, a design company focused on scientific illustration.

He was born in 1966 in Nagoya City, Japan. His long-term artistic theme is life, which includes reconstructed images of dinosaurs and other paleoorganisms. He has shown his works, mainly acrylic paintings, in numerous solo and group exhibitions in Tokyo and Nagoya. Since 2005, though, he has gradually shifted to digital creation, and this is now his main focus. In 2013, he created reconstructed images of two new discoveries: Aurornis xui, a newly unearthed species of dinosaur announced in Nature; and a Therizinosaurus nesting site in Mongolia, announced by the Society of Vertebrate Paleontology. In 2014, he created an image of the body of a dead dinosaur drifting under the sea in ancient times based on remains found by Hokkaido University in Hobetsu, Hokkaido as well as a new reconstructed image of Deinocheirus. In 2015, he drew two other new discoveries, Nipponoolithus ramosus and Huanansaurus ganzhouensis. He hopes to continue creating his vivid images of ancient creatures, based on insights gained from discussion with researchers.

A Spanish illustrator, born in Madrid in 1964. He has been a professional illustrator for over 30 years and has had a deep professional and personal interest in paleoart for the last 20 years. These years of experience and ongoing study have given him a great deal of paleontological knowledge about fossil plants and vertebrate and invertebrate animals, since the Mesozoic and Palaeozoic eras are his specialty. He has worked for some of the most prominent paleontologists, including Paul Sereno, Curry and Kristi Rogers, Jennifer Clack, Alan Titus and Jose Luis Sanz. He also works regularly for some of the leading scientific journals, including Nature, Scientific American and National Geographic, and collaborates in large scale projects for prestigious museums worldwide. He employs both traditional and digital techniques to achieve his realistic style. In his digital work, he avoids artificial methods such as photo-montage and rendering, so his digital creation process is identical to his work with traditional medial like oil and acrylic.

He is a renowned Japanese science journalist, TV commentator, and a senior researcher at Japan Space Forum. His reportage spans a wide range of science topics, from paleontology to space, from life sciences to global issues, and beyond, to art, literature and science fiction. He was the managing editor of Newton, the immensely popular science magazine in Japan for 20 years, since the time of the first issue in 1981. During his time at Newton he also published numerous science books. Over the past 40 years, Terakado has been covering the development of the study of dinosaurs, and during that time he has witnessed a dramatic evolution in the world of dinosaur art, or "paleoart". This book is a collection of his favorite works by contemporary paleoartists from around the planet.

Paleoart is any original artistic manifestation that attempts to reconstruct or depict prehistoric life according to the latest knowledge and scientific evidence in paleontology today. Paleoart first became extremely popular during the 1990s following the megahit Jurassic Park (1993) and was enhanced by advances in computer graphics technology. Since 2000, the Society of Vertebrate Paleontology has awarded the Lanzendorf PaleoArt Prize for achievement in the field.