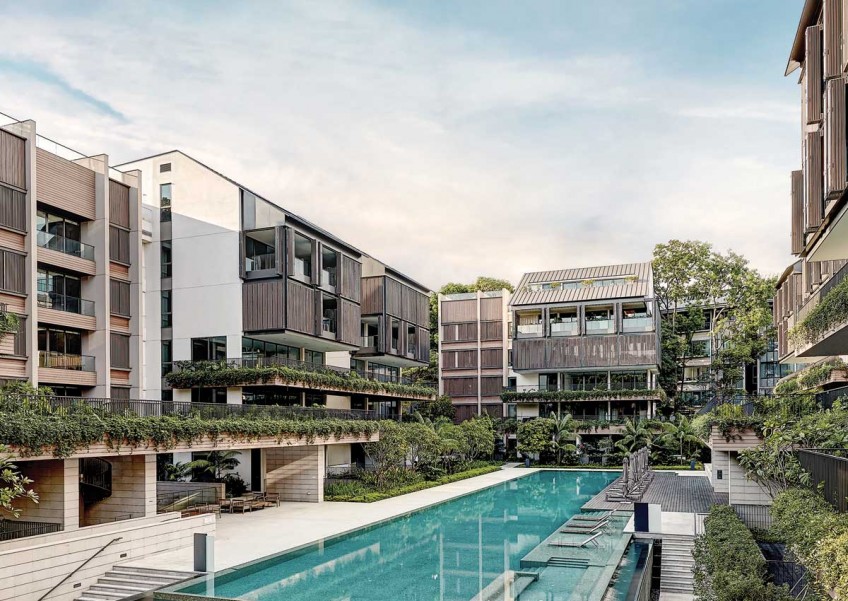 The one deal that turned heads and we believe also marked the recent high point of the CCR non-landed private residential market was the purchase of the remaining 45 units at The Nassim (above) by banker Wee Cho Yaw. The deal size of S$411.6 million translates to a price of about S$2,300 psf.
Capitaland

Ever since the marketing of OUE Twin Peaks was refreshed by the deferred payment scheme in late first quarter 2016, the high end non-landed segment of the private residential property market sprung back to life. Initially treated with scepticism, the overwhelming acceptance of this payment plan ultimately surprised even seasoned marketing professionals. The success of this scheme was subsequently modified in parts by other developers in the Core Central Region (CCR) and they too were met with good response by the market.

Thereafter, with a falling number of projects in the high-end segment of the market having the ability to offer such schemes, the market entered the next phase - that of bulk sales, structured and unstructured. The structured transactions began simply with a plain-vanilla purchase of the development company holding the remaining 23 units of Starlight Suites at River Valley Close and then rose in complexity to the Profit Participation Securities (PPS) scheme for Nouvel 18 on Anderson Road. These structured deals continued to keep interest in the high-end market at strong levels and the market was on edge with talk of which deal would be next.

The one deal that turned heads and we believe also marked the recent high point of the CCR non-landed private residential market was the purchase of the remaining 45 units at The Nassim by banker Wee Cho Yaw. The deal size of S$411.6 million translates into a price of about S$2,300 psf. Prima facie, the price appeared on the low side, but if one tops back the bulk discount of 18 per cent, the price is a fair reflection of value in the area.

Although the authorities have closed the avenue whereby residential properties could be sold with minimal stamp duty payable via the sale of shares in a corporate entity holding residential property, the market sentiment in the high-end sector had already turned positive following the series of bulk sales.

While market watchers have been busy bantering over the direction of the high-end non-landed market, they have failed to, or at least not openly discussed, why ultra-sophisticated buyers are taking a fresh position in the high-end residential market here.

Figure 1 shows the average price taken from Savills' basket of high-end properties. In the price chart are enumerated, though by no means exhaustive, what we believe to be the five major kickers that catalysed the market in the past one year. The first was the relaunch of OUE Twin Peaks with the deferred payment scheme. The second was the date of the bulk purchase of Starlight Suites; third was the sale of iLiv@Grange to a group of high net worth individuals; fourth was the PPS transaction for Nouvel 18 and fifth was the sale of the 45 units at The Nassim. When these transactions were sequentially laid out on the price chart, coincidentally or not, it appears that prices have stabilised and inched up marginally.

The asterisk in the price chart would be the 11th hour entry of bulk sales (the days running up to March 10, 2017) at TwentyOne Angullia Park to Tower Capital, the sale of The Lumos to a group of Singaporeans and the purchase of Robin Residences by personalities linked to Evia Real Estate. The sale of Cityvista Residences by Alpha Investment Partners to an Indonesian was probably also inked between point 5 and the asterisk.

When you look at the transaction numbers for the CCR, 2016 probably represented the turnaround in the market with data extracted from Realis showing a 54.5 per cent year-on-year (y-o-y) increase.

Setting aside the attractive pricing reason, one other possible factor as to why ultra-sophisticated investors are looking at the non-landed segment of the CCR is that fundamentally, things are rapidly improving for the CCR. On the supply side, URA statistics show a sharp fall in pipeline supply after 2017.

Using Realis as the source of data for non-landed transactions, in 2016, new sales were 667 units. If this demand is maintained for the next five years, it means that there is a relatively good match between demand and supply.

The road map for a sustained recovery

To galvanise the market further, a continuation of momentum built up from 2016 is necessary. As the market's direction in terms of prices and volume is hanging in the balance, marketing strategies have an important role to play. Without going into the various marketing angles, we shall focus on just one - that is to prioritise the targeting of buyers by their nationality in terms of price range.

For our analysis, we have left out companies as a subgroup of buyers. Generally for the CCR, in the past one year, as Singaporeans made up 66 per cent of the total transactions in the non-landed segment of the market, the local population base should naturally be the starting point of any relaunch or new marketing campaign as it is an easier and more cost-effective segment to go after (one saves on the cost of holding overseas road shows).

For this group of individuals, with the total debt servicing ratio (TDSR) and cooling measures still in place, mild y-o-y price adjustments, preferably to the point of a continuous creep, is congenial to sustaining healthy market demand as any sudden spike in prices may easily lead to buyers forfeiting the game once they are priced out due to possible breaches to their debt service ratios. In other words, unlike in the past, these days when it comes to pricing strategy, casting the lynyard too far can be counterproductive. The market today is extremely price sensitive.

Also, as Singaporeans pay lower additional buyer's stamp duty (ABSD) for purchases subsequent to their first, the deadweight loss due to these duties is lower. This is also another reason why they could be the subgroup that is likely to keep sales momentum going for the market to recover.

The ability of overseas buyers to kickstart or maintain the sales momentum for the CCR non-landed market is however not that straightforward as their constituent in the various stratas of the market by price quantum varies significantly. In general, for new sales in the CCR, it is only in the more than S$2 million strata that we see the dominant presence of overseas buyers.

However, once we delve further into the district level, we discover a totally different picture. Owing to space constraints, we shall segregate new sale transactions for Districts 9, 10 and 11 but for districts 1, 2 and 4 we shall treat them as one subgroup. For the past year, overseas buyers have dominated in District 9 once prices are more than S$2 million. For Districts 10 and 11, Singaporeans dominate in almost all price stratas except for the S$2 million to S$3 million range in District 11 and the more than S$5 million category in District 10.

For districts 1, 2 and 4, overseas buyers are the majority in the more than S$2 million to S$3 million strata.

From March 2016 to February 2017, the high-end non-landed segment of the private residential market was revived through a sequence of events from developers offering alternative payment schemes to ultra-sophisticated investors taking large positions either directly or through structured arrangements in the bulk sale market. For individuals, feedback from the ground hints that they are still keen to commit but somewhat still concerned about the cooling measures and TDSR still in place.

Although returns from a sample of developers' weekend sales suggest that market sentiment improved after the government's surprising tweak to the seller's stamp duty and recent enhanced deferred payment schemes offered by developers may have uplifted sales in certain projects, in general, buyers may still need some convincing for them to overcome their inertia. After all, many who buy into the luxury end of the market are either overseas nationals or locals buying for investment, for whom the main stumbling block to a transaction is the high additional buyer's stamp duty. As this raises the cost of entry, marketing strategies are becoming even more important; without a focused and sustained marketing effort, activity will fall back into slumber.

Ultimately, assuming that developers and agents play their roles well this year, which we believe they will, we are of the opinion that overall prices for non-landed properties in the CCR may still eke out a return. Not high, but still a good enough turnaround of a 1-3 per cent price gain.