GUANGZHOU, China, April 2, 2018 /PRNewswire/ -- The China Import and Export Fair (the Canton Fair) has named Qatar Airways as the official partner airline of the 123rd Canton Fair. As part of the partnership, Qatar Airways will offer special discounted fares to people traveling to the Fair, with a special focus on buyers flying from select cities in the Middle East and Africa. 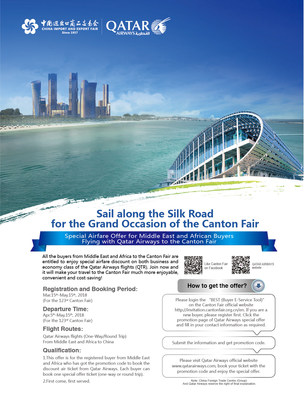 The offer is good for both one-way and round-trip economy and business class tickets purchased during the Fair's registration period of March 15 - May 15, and for travel to the Fair between April 5 - May 15 from 13 destinations in the Middle East and 19 in Africa:

"We are thrilled to once again join hands with Qatar Airways," said Alan Liu, Deputy Director General of the Foreign Affairs Office at Canton Fair. "Their commitment to quality, combined with their strong support of China's Belt and Road Initiative, makes them the perfect partner for us. Their extensive network, which has included connections from Guangzhou to cites across the Middle East and Africa, allows buyers from growing economies across the region to access the vast array of partnership opportunities that will be available at Canton Fair."

"We also hope the partnership will help guests from these countries to lower the cost of attending the fair and gain a better experience at the 123rd Canton Fair," added Liu.

To apply for the offer, visitors can follow the below process:

The China Import and Export Fair, also known as the Canton Fair, is held biannually in Guangzhou every spring and fall. Established in 1957, the fair is now a comprehensive exhibition with the longest history, highest level, largest scale and largest number of products as well as the broadest distribution of buyer origins and the highest business turnover in China.