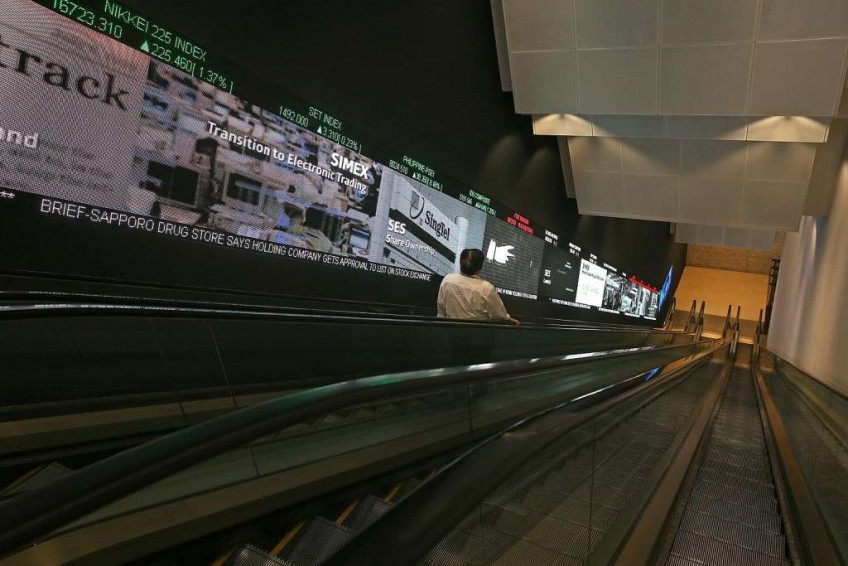 When the lunch break was scrapped in 2011, there was talk that the move was aimed at attracting a new type of traders - the algos. If the SGX reinstates the break, it would send out the message that it is willing to address the grievances of market players.
The Straits Times

Ideally, the Singapore Exchange (SGX) and brokers should be working together to promote the local stock market to investors.

But the past six years have been marred by various squabbles.

One issue that seemed to encapsulate this ill-will was the scrapping of the lunch break in March 2011.

Now the SGX has apparently blinked and is considering a move to reinstate the mid-day break.

The big question is whether such a symbolic gesture will really boost the confidence of retail investors - who are overwhelmingly serviced by remisiers - and lure more of them to trade on the local bourse.

Not that abolishing the lunch break was without its merits.Besides hoping to boost trading levels, the SGX had said that removing the old 12.30pm to 2pm lunch break would also help to reduce the "gap" risk for investors.

This refers to the potential losses that traders may sustain if they are unable to react to major market developments in other regional markets such as Hong Kong or mainland China because of the lunch break.

The break was removed soon after the SGX installed a $250 million ultra-fast engine.

This led to gripes among remisiers - rightly or wrongly - that the SGX's intention was really to keep its spanking new computer running continuously to attract a new type of traders - the algos.

These are sophisticated traders who use ultra-fast computers to issue and then cancel orders almost simultaneously to make money from any tiny differences encountered in the stock prices.

Worse, the remisiers worry that they and their snail-paced clients are no match for the lightning-fast computers deployed by the algos - and that they run the risk of getting fleeced by these fleet-footed machines.

Whether there is any truth in this assertion or not, the impression has stuck and, like it or not, the unhappiness over scrapping the lunch break has festered and become an unwelcome distraction in the Singapore securities market.

Take, for instance, a letter written to this newspaper by a reader, Mr Tng Kim Bock, two years ago. In it, he claimed that continuous trading on the local stock market was necessary in order for the algos to operate because a break in trading would "mess" up their computers' "mind".

He asked why the SGX was giving an advantage to one group of market players (the algos), at the expense of others (such as retail investors) whom the SGX wanted to attract back to the market.

Now if moves by the SGX such as scrapping the lunch break had been to attract the algos here in a big way, that has failed to show up in the trading volumes.

Indeed, the first two months' average daily trades this year of $1.2 billion is about 30 per cent below the $1.8 billion registered over the same period in 2011 before the lunch break was scrapped.

Instead, factors such as Mr Donald Trump's surprising victory at the US presidential election last November have proved to be much more significant catalysts, motivating investors - both retail and institutional - to initiate fresh investment positions on the local bourse and elsewhere.

As such, relenting to the brokers' demand for the return of the lunch break may turn out to be a wise move, as it will lay to rest a contentious issue about the SGX favouring the algos over the rest of the market participants.

In any case, the SGX plans to time the new lunch break between noon and 1pm to coincide with the break in Hong Kong and mainland China so as to minimise the gap risk, when trading activity is at its thinnest - at only about 5.1 per cent of daily average turnover.

There is another benefit - giving market players an opportunity to announce any price-sensitive announcements during the lunch break.

One example that comes to mind would have been the Government's announcement more than a week ago that it was easing some residential property curbs. It took place during market trading hours.

Given the manner in which the share prices of some property stocks rallied soon after the announcement, some remisiers had expressed unhappiness, saying the announcement should have been made during a period when the market was not trading in order to give every investor adequate time to digest the information.

And having a lunch break may just offer that much-needed window for players who do not want to wait all day till the close of the market before making their announcements.

Still, the purely symbolic gesture of reinstating the lunch break is unlikely on its own to boost stock trading in a significant way.

As such, the SGX's other moves to boost retail interest are much welcomed. These include its decision to press ahead with requiring mainboard new listings to allocate at least 5 per cent, or $50 million, whichever is lower, of their initial public offerings for public subscription.

More controversial, however, is the proposal to widen the bid-offer spread for stocks with share prices between $1 and $1.99 to one cent from 0.5 cent in its bid.

To some market pundits, this reflects another tacit U-turn to roll back policies favouring the algos since they claim that only such players would want the lowest bid-offer spread possible in order to get the cheapest pricing for their computerised trades.

Widening the bid-offer spread is purportedly to try to lure back very short-term human traders who want to flip their positions as quickly as possible but need the wider spread to cover their trading costs.

Not surprisingly, it is welcomed by the stockbroking community, which wants the SGX to go even further by including stocks priced between 50 cents and $1 to be covered by the new bid-offer spread as well.

The argument is that this would broaden the number of stocks that would be covered to almost 200, or almost 30 per cent of all SGX-listed stocks, rather than the 60-odd stocks as envisaged in the current proposal.

One upshot from the SGX's latest initiatives is the implicit message it sends that it is willing to listen and roll back unpopular policies.

In recent months, more and more retail investors are being drawn into the local stock market as sentiment improves.

Any actions taken by the SGX to further boost their participation would be welcomed warmly by the stockbroking community.