This RMIT undergrad had a simple idea to sell fries - invested $10k in it, now earns up to $2k a day 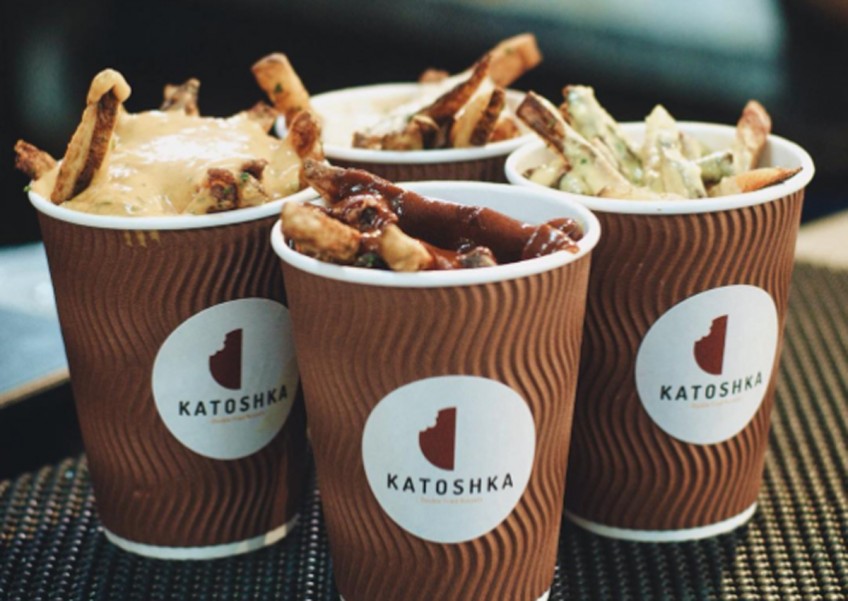 In recent years, the annual Geylang Serai Ramadan Bazaar has brought about so much hype.

In place of Malay kuehs and keropoks, "hipster food" is taking over instead and the once-traditional bazaar resembles more like an Artbox fair now.

This year, there were plenty of media coverage on the list of must-try foods at Geylang Bazaar, to which I heeded obediently.

But to my disappointment, most of the stalls featured were neither worth the queue nor the hefty price tag. One particular stall however, stood out to me.

Katoshka did not serve any newfangled dish that is unicorn or galaxy-themed.

It isn't exactly a novel idea, but it is a classic and hearty menu that has captured the hearts and tastebuds of many Singaporeans.

First things first - what is Katoshka?

26-year-old founder Hasif Othman laughed, and confessed that he wanted his brand name to "sound international". He explained that the name derives from the Russian word 'Kartoshka', which means potato.

The idea came to fruition in May last year after a casual chat with his bestfriend Shybree. Moreover, the RMIT student who is majoring in Economics and Finance, said that he had always wanted to start up a business of his own.

Despite any experience or knowledge in the F&B industry, Hasif charged ahead with the idea anyway.

He spent 3 to 4 months on business planning and pumped in a sizeable $10,000 from his savings to set the idea in motion, with some financial contribution from his parents.

"A lot of R&D was done. We had to decide first what would be on the menu and from there, we sourced for the ingredients. Then we got our family and friends to conduct taste tests on our menu," said Hasif.

Their fries were inspired by Amsterdam chips served in cones, and are handmade from scratch using premium-grade Russet potatoes.

The potatoes are sourced from the US, then cut and double-fried to golden perfection, before it gets poured with their delectable sauce.

Katoshka made its debut at last year's Geylang Ramadan Bazaar with a different set of flavours, which include salted egg yolk and BBQ sauces.

As a first-time bazaar vendor, Hasif was clearly inexperienced and faced a couple of challenges.

"At the start, we had issues with our operational system. It took us some time to prepare the food for our customers as we only had 2 fryers back then, and our transaction rate was slow."

"Because of the nature of our product, everything has to be fried on the spot, which meant longer waiting time for our customers. We used to note down customers' phone numbers and text them [to come collect] when their fries are ready. Waiting time stretched to 30 to 45 minutes due to the lack of resources."

Although the initial response was rather slow, the crowd slowly started to pick up by the second week thanks to media coverage and support from family and friends.

"We were lucky because we presented a rather unconventional food for a 'pasar malam' which caught the attention of the media. Furthermore, our main highlight was the salted egg yolk sauce, which was highly raved last year, and this earned us considerable attention," said Hasif.

Although Katoshka is still in its infancy stage, the brand isn't exactly a small fry (pun intended).

For the past year, it has gained a lot of media and public attention - and their snaking long queues is a testament to this fact.

To date, Katoshka strictly operates at pop-up events. Some of the recent ones include Laloolalang Feastival 2017 at National Museum of Singapore, Pesta Raya at Esplanade The Lawn, and Baybeats.

According to Hasif, the business' cash flow has been good and steady so far. He sells an average of 300 cups of fries a day, earning $1,500 to $2,000 in daily sales (depending on the scale of the event), with Geylang Bazaar being the most profitable.

Within two months, the business broke even.

"We are picky with the choice of events as the running costs and rental fees are high. But typically, we will hold one event every 2 months."

When asked if he feels the heat of competition from other vendors, Hasif said that he is not the least bit affected, and is instead encouraged by the thriving Halal food industry in Singapore.

"Indeed, the F&B industry in Singapore is very competitive and often saturated. To stay relevant in this industry, I believe that we must not be afraid of change and continuously innovate."

And true to his words, Hasif makes an effort to continually come up with new flavours every few months.

With his core team of six, who are mostly undergrads, Hasif finds that their youthful vibe allows them to resonate with and cater to the interests of the young millennials who are in tuned with the latest food happenings in Singapore.

He is also expanding the menu beyond just serving fries in a cup. Recently, Hasif introduced drinks to the menu, offering home-brewed peach or blueberry teas and flavoured soda drinks.

Sharing his future business plans, Hasif said that he is focused on doing events for another year or two, and that a brick-and-mortar store is still not on his business map for now.

"One of the reasons why we do not intend to open a physical shop is because we understand that the nature of our product is not for the long-term. We will never have a finished product because there is always a need to have a continuous, greater knowledge and understanding of the market in order to improve our product. This is what I feel differentiates us from other food startups."

When asked to impart a piece of business advice for aspiring entrepreneurs, Hasif said: "Just start. You'll learn along the way. Regardless of the outcome, the experience will only shape you to be a better version of yourself."