OTTAWA, Ontario, June 26, 2019 /PRNewswire/ -- In celebration of Canada's exceptional history of peaceful co-existence with the United States, the Royal Canadian Mint is pleased to announce it is launching the limited-edition Pride of Two Nations two-coin set, created in partnership with the United States Mint. This coin set, featuring numismatic renditions of the famed designs of Canadian and American bullion coins, will become available to the public on July 3, 2019. 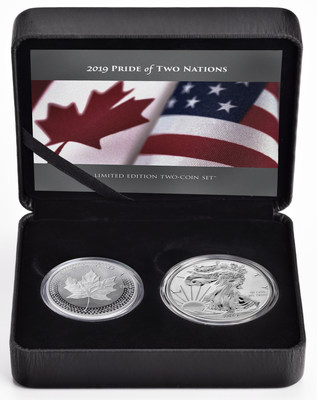 "The maple leaf and eagle are proud symbols of our neighbouring nations, which have grown and prospered together for more than 150 years," said Marie Lemay, President and CEO of the Royal Canadian Mint. "We are proud that these same emblems, found on our famous Silver Maple Leaf and Silver Eagle bullion coins, could be brought together in an inspiring new coin set that celebrates the special bond between Canada and the United States."

The set contains a special numismatic version of a Silver Maple Leaf coin, featuring a modified proof finish and reverse design, as well as a United States Mint American Eagle 1 oz. silver coin with an enhanced reverse proof finish. Both finishes are firsts for these coins.

The reverse of the Silver Maple Leaf coin features Walter Ott's classic sugar maple design, first created in 1979. That icon of the Mint's Maple Leaf family of bullion coins rests on a background of radial lines encircled by a pattern of stars and maple leaves on the perimeter. This same pattern surrounds the Susanna Blunt effigy of Her Majesty Queen Elizabeth II on the obverse.

The obverse (heads) of the American Eagle 1 oz. silver coin features Adolph A. Weinman's full-length figure of Liberty in full stride enveloped in folds of the star spangled banner, with her right hand extended and branches of the laurel and oak in her left. The coin's reverse (tails) features a heraldic eagle with shield, clutching an olive branch in the right talon and arrows in the left.

These stunning numismatic coins are packaged in a special clamshell case branded with the logos of the Royal Canadian Mint and US Mint.  Inside, a certificate emblazoned with imagery of the Canadian and American flags adds an eye-catching touch of colour.

Images of the Pride of Two Nations Coin Set are available here.

About the Royal Canadian Mint
The Royal Canadian Mint is the Crown corporation responsible for the minting and distribution of Canada's circulation coins. The Mint is recognized as one of the largest and most versatile mints in the world, offering a wide range of specialized, high quality coinage products and related services on an international scale. For more information on the Mint, its products and services, visit www.mint.ca. Follow the Mint on Twitter, Facebook and Instagram.

About the United States Mint
Congress created the United States Mint in 1792, and the Mint became part of the Department of the Treasury in 1873. As the Nation's sole manufacturer of legal tender coinage, the Mint is responsible for producing circulating coinage for the Nation to conduct its trade and commerce. The Mint also produces numismatic products, including: proof, uncirculated, and commemorative coins; Congressional Gold Medals; silver and bronze medals; and silver and gold bullion coins. Its numismatic programs are self-sustaining and operate at no cost to taxpayers.