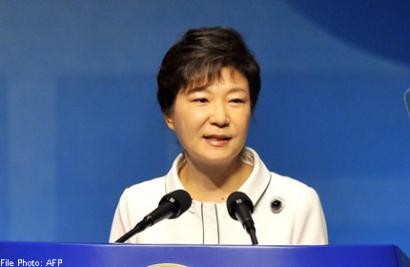 Indonesia and Korea have agreed to more than treble trade from US$29.6 billion (S$36.9 billion) in 2012, and both governments have expressed hope of finalising a free-trade agreement by year-end.

"We need a firm institutional framework if South Korea and Indonesia are to achieve the goal of expanding trade volume to $100 billion by 2020," Park told business leaders from the two countries at a meeting in the Indonesian capital, Jakarta.

Park said she hoped the comprehensive economic partnership agreement (CEPA), which is currently under negotiation and will break down trade barriers, would be finalised at the earliest possible date.

"This pact will contribute greatly to expanding trade volume between the two countries," Park said of the agreement, which has gone through five rounds of negotiations since talks began last year.

Among the deals signed, worth $4.14 billion collectively, was a $3 billion investment into a railway to transport coal and $600 million into a power plant.

Park's push for the agreement comes on the back of the Asia-Pacific Economic Cooperation summit, where leaders preached free trade to buoy the global economy. Korea is one of many nations looking to tap into Indonesia's booming economy - it is already Indonesia's third-biggest investor and fourth-largest trade partner this year, according to the Indonesian Chamber of Commerce.

Park told local media that she hoped to boost defence ties with Indonesia, having clinched a $1.1 billion deal in late 2011 to build two submarines for the country and transfer technology so Indonesia could build a third.

Her remarks came as South Korea and Japan took part in a US-led joint naval drill off the southern coast of the Korean peninsula that provoked fiery threats of a counter-attack from North Korea.

Park did not address the threats, but criticised the North Korean regime, which has restarted a plutonium reactor that could help boost its nuclear weapons programmes, according to the South's spy agency.

"It makes no sense for North Korea to channel all efforts and energy into the development of nuclear weapons at a time when people are suffering of hunger and other hardships," she told the Kompas daily newspaper.

The Korean president is Indonesia as the two countries mark 40 years of diplomatic ties. Park is scheduled to meet with Indonesian President Susilo Bambang Yudhoyono on Saturday.