Since its 1847 founding in the Tashiro (then Hizen-Tashiro) area of Tosu, Saga, Hisamitsu Pharmaceutical has worked to provide Japan and the rest of the world with high-quality pharmaceutical products. Always footing its operations in that local foundation and adhering to a consistent, customer-first philosophy, Hisamitsu Pharmaceutical is now in its 172nd year--a testament to a legacy that, like the recent recognition from Euromonitor International, would not have been possible without the valuable, ongoing support of the company's many customers and stakeholders.

May 18 has been registered with the Japan Anniversary Association as "Salonpas® Day," whose date has linguistic ties to the Japanese phrase "Kori o iyasu " ("relieving stiffness"): "Ko " corresponds to the number 5 ("go "); "i " represents 1; and "ya " stands for 8.

Hisamitsu Pharmaceutical will continue to expand its business operations worldwide, centering its activities on the basic principle of "Delivering a Better QOL to the World." 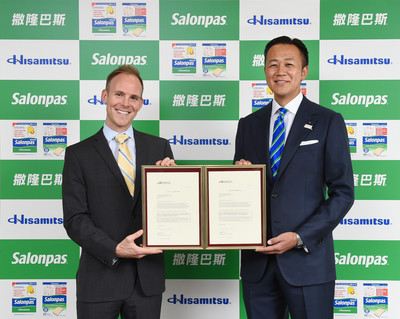 Euromonitor International, a British company headquartered in London, is a leader in international market research with exclusive researchers in over 100 countries.