ZUNYI, China, Oct. 17, 2017 /PRNewswire/ -- A delegation led by San Francisco mayor Edwin Lee and his wife paid a visit to Maotai, the town in Guizhou province that is the birthplace of the eponymous and famous Chinese drink, on October 13th and 14th. The delegation inked a memorandum of understanding on friendly cooperation with Kweichow Moutai Co., Ltd, the maker of the internationally renowned liquor brand Moutai, and took part in the launch ceremony for Kweichow Moutai Day commemorative liquor, a specialty product designed exclusively for the American market.

With favorable geographical conditions, thousands of years of experience in the making of liquor coupled with the mystery surrounding the secretive and unique brewing process, the town of Maotai remains the sole and exclusive source of the fiery drink, a staple of state banquets and one of China's most iconic brands, earning it the status as China's "national liquor." 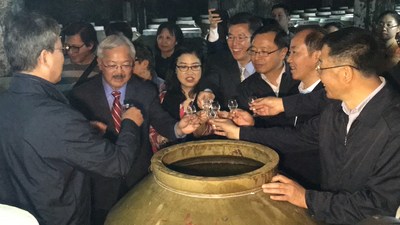 It's a little known fact that in 1915, Moutai received the gold award at the Panama Pacific International Exposition held in San Francisco, setting the liquor brand on its way to becoming one that is emblematic of China. Kweichow Moutai chairman Yuan Renguo and general manager Li Baofang, the two executives who facilitated the delegation's visit, said: "Moutai's international expansion dates back to the Panama Pacific International Exposition that took place more than 100 years ago. We are very much appreciative of and value the city of San Francisco!"

Lee is the first Asian American mayor in San Francisco's history. In 1915, his father was an ordinary citizen in Taishan, a city in China's Guangdong province. In the 1930s, Lee's father came to the US and fought in the Second World War. Moutai's status as China's national liquor is in large part due to its unforgettable history and unique quality. Moutai was one of facilitators when China and the US established diplomatic relations.

Moutai returned to San Francisco in 2015 when it celebrated the 100th anniversary of winning the gold award. The mayor was one of attendees. At the celebration, Lee designated November 12 as Kweichow Moutai Day. The two Moutai executives were visibly moved when they heard the announcement of the designation, and, on the heels of the announcement, the city and the liquor maker have since further enhanced their relationship. Moutai hosted the first anniversary of newly designated day in San Francisco last year and invited the mayor to pay a visit to the beverage's birthplace. Moutai views Lee's trip not only as an honor but also as a "return home" following Moutai's winning of the award in 1915. Moutai and San Francisco mutually cherish the important friendship.

At 3:30 pm on October 13, the 20-member delegation, led by Mayor Lee and his wife in the company of several Chinese San Francisco-based entrepreneurs, visited the Kweichow Moutai distillery, the largest distilled liquor production facility in the world. They were deeply impressed by Moutai's 2,000 years of history. The mayor said, he had already read up on the liquor's rich history and knew that Moutai has roots going back to the Han Dynasty when it was called ju jiang, yet, he was still quite amazed by China's extensive and profound liquor culture. They tasted the most authentic and purest of the vintage Moutai in the distillery's cellar, a cellar that is known in local parlance as the yeti jinku, the magical vault where the "golden liquid" is stored. The delegation said the feeling was captivating as the soft and mellow liquor slid from their mouths down into the belly. When visiting the town's National Liquor Culture Museum, an extensive museum honoring Chinese wine culture built by Moutai, Mayor Lee couldn't help describing his excitement, when he said in his native English, "People of Moutai, you are brewing a world-class liquor…"

With China's continued rapid growth, the country is furthering its global expansion. Apple recently announced plans to build a big data center in Guizhou province, the province that is home to Moutai. During the mayor's visit to Moutai, the San Francisco city government signed a memorandum of understanding with Moutai Group. According to the agreement, the two parties plan to cooperate strategically and extensively and, as part of the cooperation, Moutai will build an office in San Francisco, where a formal celebration honoring Kweichow Moutai Day will be held annually. In addition, Moutai plans to provide commemorative liquor products designed exclusively for the US market as part of the annual celebration. The special commemorative liquor features gold and silver bottles with the aim of conveying the message that Moutai is working with the city of San Francisco, known in Chinese as "Old Gold Mountain", from its association with the California Gold Rush, in the hope of creating a new Golden Era.