Sentosa Cove villa designed by celebrities' architect up for sale 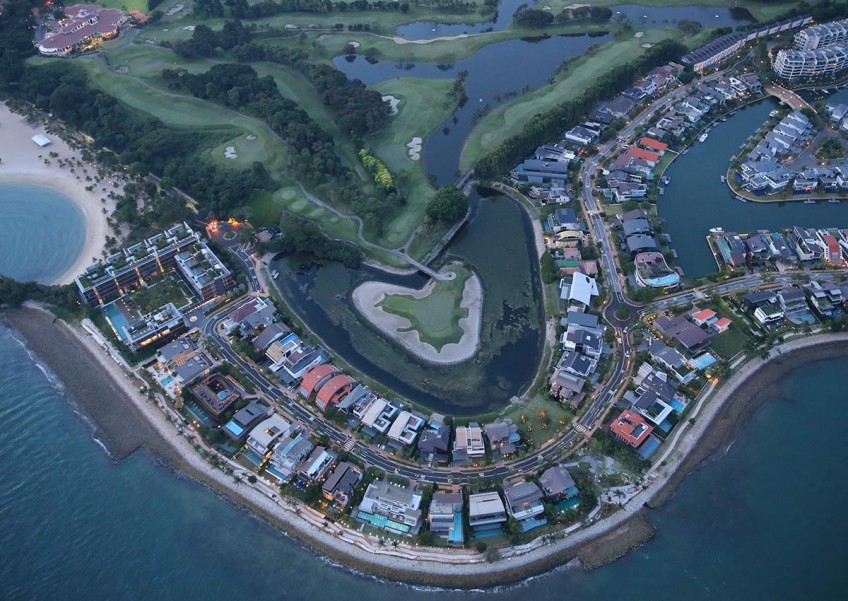 A villa on Sentosa Cove designed by Los Angeles-based architect Richard Landry, dubbed the "King of the Mega Mansion", is on the market.

Its owner, a European in the private equity business, occupied the property briefly, in 2013 and in 2014, before he moved to London to pursue business opportunities. He is now based there.

Located along Cove Drive, the waterway-facing property has a built-up area of about 11,800 sq ft and spans two levels; it also has a basement and an attic.

The villa has five ensuite bedrooms, a theatre, wine cellar, playroom and pool. The attic houses a study. The property also comes with its own berth for a yacht.

Landry Design Group clinched a Gold Nugget Award (Award of Merit) in the US in the international category for on-the-boards projects back in 2010, said Sebastian Yap, senior group sales director of Savills Residential, which is marketing the property.

The expressions-of-interest exercise for the bungalow will close on April 19.

The S$24 million that the owner is understood to be expecting reflects a 27 per cent discount to the property's valuation of S$33 milion (S$2,770 psf on land area) back in 2012. Since then, the valuation for the property has fallen steadily to S$30 million in 2014 and S$27 million last July.

Mr Yap said: "The owner is prepared to sell below this, taking into account the fact that the buyer will have to invest in sprucing up the property, which has been vacant since 2014."

Mr Landry has designed the homes of many tycoons and celebrities; his client list includes US football quarterback Tom Brady and his supermodel wife Gisele Bundchen, and Hollywood actor Mark Wahlberg.

Both deals were done within a week of each other in September.

What has baffled market watchers is that the lower-priced transaction was for a posh location in Sentosa Cove's southern precinct facing the Southern Islands; the higher-priced deal was for a property in the northern precinct which, though it fronts the sea, has views of the port's container terminals and Singapore's Central Business District.

Market watchers advise against reading too much into the two deals, given the illiquid bungalow market in the neighbourhood. The price varations may have to do with the buyers and sellers' varying levels of motivations to transact, they say.

Sentosa Cove's bungalows are a black swathe at night, reflecting the high vacancy levels in the waterfront housing district.

But Samuel Eyo, managing director of Singapore Christie's International Real Estate (Residential), said this is due to the unique nature of the homes on the island.

"Many bungalows in the Cove are owned by foreigners. This is the only place in Singapore where foreigners who are not PRs (permanent residents) are allowed to buy a landed home - but the condition is that it is for their own occupation only; they are not allowed to lease the property.

"So these foreign owners treat this as a holiday home that they visit may be a few times a year and leave it empty the rest of the time."

Based on anecdotal evidence, some Singaporean families who moved to Sentosa Cove have since returned to the mainland because of the longer commute to their children's schools.

But Mr Eyo said: "Many of the Singaporeans who own bungalows in the Cove may treat this as their weekend home. And those who do live there throughout the week are UHNWIs (ultra-high-net-worth individuals) who are semi-retired.

"For many of them, their Sentosa property is just a part of their investment portfolio, which would include other properties as well as equity."