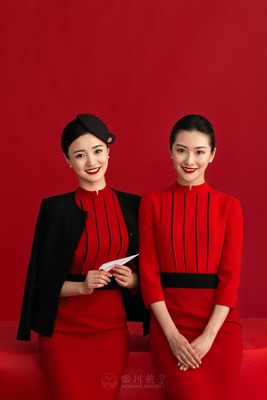 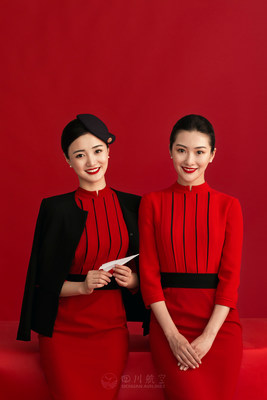 Inspired by Sichuan Airlines' theme color, "Sichuan red," the ladies' new uniform is composed of a red one-piece, a black blazer, a red blazer, a black winter wool coat and a black hat. The gentleman's uniform features a white shirt with red stripe design and a splash of red on the blazer pocket to echo the ladies' dress.

"Our new 7th edition uniforms are inspired by the idea of 'Movements, Sichuan' with the color red representing the hospitality and passion of Sichuanese people as well as the spicy flavour of Sichuan cuisine. We want to bring the first impression of Chinese elements and Sichuan flavors to the travelers through the new design alongside the flight attendants' professional and heartwarming services," said Shi Zuyi, General Manager of Sichuan Airlines.

Sichuan Airlines refreshes its uniforms every five to ten years, and each design has been an expression of the airline's image throughout different stages of its development. The company puts lots of thought into uniforms, from the polka dot shirts with white dresses in early years to the 6th edition red-rose and sapphire design with bowknot on the waist.

The airline now owns the largest Airbus fleet in China, and its 270 "Panda Routes" connect Asia, Europe, Oceania and North America. With the release of its new cabin crew uniforms and the upcoming introduction of new A350 passenger planes, Sichuan Airlines continues to fly on towards its networked, international, all-service goal.

Established in 1986, Sichuan Airlines, one of the most distinctive airlines in China, is headquartered in Chengdu and operates a fleet of 134 aircraft on more than 270 domestic, regional and international routes, covering Asia, Europe, North America and Oceania. The company is committed to providing service that is infused with "Chinese Elements and Sichuan Charm" to its more than 29 million passengers each year. Its service quality and on-time performance rank among the top of all the Chinese-mainland carriers, and the company has been named the "Best Airline In China" by CAPSE for four consecutive years.