SYDNEY, March 6, 2018 /PRNewswire/ -- United Franchise Group (UFG) is pleased to announce two decades of evolution and growth, as they celebrate the 20-year anniversary of the first Signarama® location opening in Australia. Signarama is the world's largest full-service sign company, approaching 900 locations around the world. 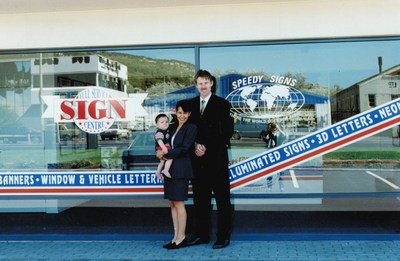 After launching in the U.S. more than 30 years ago, Signarama first expanded into Australia 20 years ago.  Today there are 105 locations there with proven successes that include 22 Australian stores achieving "Million Dollar Circle" status in 2017.

"There have been many positive changes in the sign industry in the last 20 years that have helped our franchise locations succeed," said Evan Foster, National Director for Signarama Australia. "The future promises to be even more exciting as we embrace new technologies and product lines to strengthen our network even more across the country."

Franchisees who started twenty years ago say their success has less to do with simply making and selling signs and more to do with building strong relationships with their valuable customers to help meet their needs.

"I opened my store in 1998 and we've gone from focusing on installers and simple signs to today's world of multi-million dollar locations with experts in all fields of signage within our ranks," said Ross Wade, Signarama Dandenong, Vic franchisee.

The same milestone is also being celebrated in New Zealand, where Master License partner, Grant Archibald now has 25 locations under the "Speedy Signs" name. Grant and his wife, Sarah were privileged to be able to meet with Prime Minster, Jacinda Ardern on the actual 20th anniversary date. Ms Ardern congratulated them on their success in creating the country's largest network of sign companies.

"While the 20 years have passed quickly, I still remember the day we opened in Penrose, Auckland," said Archibald. "Our eldest son was only a baby in our grand opening photos, and now, in a few more months, he's getting married. The Penrose business as well as our other New Zealand locations continue to perform strongly —with no signs of stopping. We are now planning on opening another half dozen franchised locations in some of the smaller provincial centres like Gisborne, Napier, Wanganui and Timaru."

The Signarama brand continues to grow worldwide with locations now in more than 60 countries and hundreds of new locations slated for opening in 2018 worldwide.   Signarama consults with business owners to develop impactful signs, messaging, and marketing tactics that result in higher sales and increased business. To learn more about Signarama's products, services and locations, go to signaramafranchise.com.au.

About Signarama
Signarama®, the world's largest sign franchise, offers branding and messaging solutions in addition to comprehensive sign and graphic services to consumers and commercial customers – from business signs, vehicle wraps, and digital signs, to advertising and marketing services.  Signarama is part of a successful system of business-to-business franchise brands and development services under the United Franchise Group (UFG). As part of the $49-billion-plus worldwide sign market, Signarama has been at the forefront of the sign industry for more than two decades. Signarama was ranked Number 35 on Entrepreneur Magazine's Top Global Franchises list in 2016. With over 800 locations in 60 countries, the company expects to have more than 1,500 locations worldwide by the end of 2020. For more information, visit SignaramaFranchise.com.au.