SINGAPORE - Singapore Airlines Ltd is pursuing more than 50 cost-cutting initiatives including reducing fuel burn and reviewing its relationship with key suppliers as part of a three-year plan to make the airline more competitive, a newsletter to staff shows.

Singapore Airline set up a dedicated transformation office to review its strategy in May after a surprise fourth-quarter loss although it not released a cost-cutting target.

In a September staff newsletter obtained by Reuters, CEO Goh Choon Phong said the airline was working on 56 initiatives, which also include more self-service options for customers and reducing in-flight food and beverage wastage.

"While it is early days in the three-year programme, I am pleased to report that it has been going very well, and I am confident we are on track to meet our objectives," he said.

Since the review was launched, Singapore Airlines has handed two of regional arm SilkAir's routes to budget carrier Scoot, merged part of SilkAir's finance team with its parent and offered unpaid leave to cabin crew.

CAPA Centre for Aviation Chief Analyst Brendan Sobie said Singapore Airlines should consider the more radical move of merging SilkAir with its parent as part of the review. 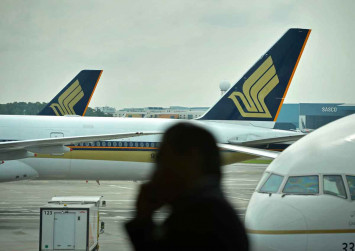 "It would generate efficiencies and ensure a consistent product at the full service end of the market," he said.

The carrier has already merged budget arms Scoot and Tigerair Singapore and folded its cargo arm back into Singapore Airlines.

SilkAir CEO Foo Chai Woo said in an interview on Wednesday that the company planned to keep the carriers separate for now but declined to comment on whether a future merger could be ruled out.

Cathay has been more aggressive in its restructuring efforts as it tries to rebound after reporting its worst first-half loss in more than 20 years. It has cut 600 jobs as part of a review aimed at reducing HK$4 billion (S$700 million) in costs over three years.