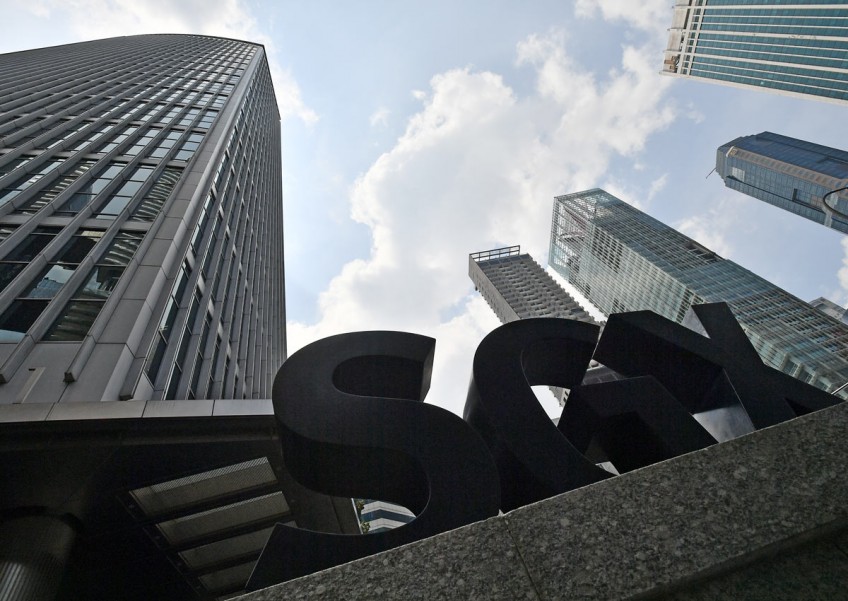 This is despite Fed's rate hike last week, with more to come; market watchers cite Reits, telcos, tech companies and banks as stars.
The Straits Times

Aside from real estate investment trusts (Reits), they pointed to staples such as telcos and technology companies, with their top picks including data centre owner Keppel DC Reit, telco Singtel and electronics maker Venture Corp.

Banks are likely to benefit from higher rates in the long run too, some said.

The US Fed raised its Fed funds target rate by 25 basis points to a range of 0.75-1 per cent last Wednesday, in line with market expectations, and also provided guidance that it expects two more hikes this year.

Its move sparked a rally in Singapore equities last Thursday that continued into Friday.

The index's recent advance has naturally hurt dividend yields, which are calculated by dividing the annual dividends on a stock, or distributions for a Reit, by the current share or unit price.

Carmen Lee, head of brokerage OCBC Investment Research, said: "With the recent outperformance of the STI, yields have correspondingly come off for the Singapore market.

For the non-Reit space, yields are typically lower now and stocks offering more than 3.5 per cent dividend yield are fairly limited."

Even so, some investors are optimistic.

Hugh Young, managing director of fund manager Aberdeen Asset Management Asia, said: "We do think rates will rise this year, but it does not dim our enthusiasm for yield plays, providing we can also see an element of growth."

Singapore Reits paid a 6.3 per cent yield on average, telcos 4.5 per cent to more than 5 per cent and the technology sector, more than 4 per cent, she said, but steered clear of naming particular counters.

Pointing out that yield plays, "especially leveraged yield plays such as the Reits, tend to struggle for relative outperformance in a rising interest rate environment", she added that investors should go for stocks with "stronger balance sheets and that have growth drivers that support a sustainable dividend payment".

Singapore Reits "are well-prepared for a rising-rate environment, with an average debt-to-asset of about 35 per cent, staggered debt maturities and more than 70 per cent of debt hedged into fixed rate", she added.

Among Singapore Reits, at least one has caught the eye of multiple analysts.

Telcos are another usual place to look for decent dividend yields, analysts noted.

Both Mr Young and Ms Lee said they favoured Singtel, with Ms Lee saying the brokerage liked Singtel's "long-term growth prospects, especially as it has been investing and building up its cyber security and ICT (information and commmunications technology) capabilities".

Its dividend yield was about 4.4 per cent, said Bloomberg on Monday - higher than the average of roughly 3.7 per cent across the 30 STI component stocks.

Ms Kum warned though that local telcos' "current high dividend yield may not be sustainable, as the more intense competition put pressure on earnings".

As for technology, Ms Kum said the local manufacturing sector has been hurt by weak global trade and domestic economic restructuring in the past few years, but the outlook has brightened, and that many tech companies here were cash-rich.

Mr Young and Ms Lee both said they liked Venture Corp, which had a dividend yield of 4.5 per cent on Monday, according to Bloomberg.

She described the company as a "consistent performer, both in terms of profitability, margin and share price".

Outside of Reits, telcos and technology-related stocks, analysts' picks were varied. Mr Young said he would also go for "some property companies with strong balance sheets capable of paying out cash - for example, Bukit Sembawang.

He also named engineering group ST Engineering, and added that one can "even throw some banks into the mix". He cited OCBC, for instance, which had the highest yield among the three local banks as at Monday.

He said TeleChoice was "well supported by its steady distribution, consumer services and network engineering businesses", while Pan-United was Singapore's biggest cement and ready-mixed concrete seller.

Serial System was among the largest semiconductor distributors in the Asia-Pacific region and has improved its earnings due to the upswing in the semiconductor cycle since the fourth quarter of 2016, he added.