This Singaporean aquarist dives with more than 100 sharks daily 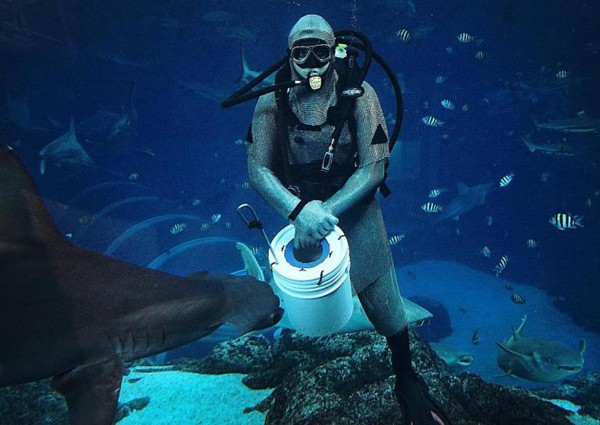 Mr Fazhrid Abdul Karim (above) says sharks can bond with people too.
The New Paper

When it comes to sharks, many people think of them as the ferocious predators that Hollywood has made them out to be.

But aquarist Fazhrid Abdul Karim told The New Paper that this couldn't be further from the truth.

Almost every day, he dives with more than 100 of them as part of his job at the S.E.A. Aquarium in Resorts World Sentosa.

The lively 39-year-old said: "Sharks are actually shy and they avoid humans, unless provoked.

"Some of these films and documentaries portray sharks as dangerous but that is not really the case."

As an aquarist of four years, Mr Fazhrid's job is to look after the welfare of the over 11 species of sharks in the Shark Seas Habitat exhibit.

His duties include feeding, aquarium maintenance and facilitating of breeding.

Most importantly, Mr Fazhrid watches out for any shark that might be sick or needs attention by relying on a keen sense of observation.

No two days are the same, and the sharks can have all sorts of issues.

"Some sharks might bite others. They can get sick or have parasites that will cause them to hit against the sand or the rockworks," he said.

"We send them for quarantine if they have any sickness and get the vet to take care of them."

When asked how dangerous sharks are, Mr Fazhrid admitted that they can hurt - the trick is to understand their demeanour and know how to behave around them.

For instance, he said that they have a "flight-or-fight mentality" when vulnerable.

"Their instinct is to turn aggressive when cornered, it is a natural defence. Try not to back-face them and swim away."

As a precaution, Mr Fazhrid puts on a chain mail suit when he feeds the sharks, which eat mainly mackerel, squid and prawn.

When he was donning the heavy get-up, before an underwater feeding session, he said with a laugh: "When the sharks eat, they can get a bit frenzied, this helps to protect me from any cuts."

But don't let the sharp teeth and large size fool you.

Beneath their fierce appearance, Mr Fazhrid said they are actually very delicate. Their cartilage-heavy body makes them fragile, and they can get hurt easily.

He said: "The handling of sharks is critical because they have no rib cage, and their body weight can collapse against their organs. You must know proper techniques."

In addition to the training he received from the S.E.A. Aquarium, he has dived with sharks in the open sea with renowned shark expert Cristina Zenato and spent half a month in the Bahamas learning shark-handling techniques.

"We went out to the open sea, and there were about 30 wild sharks at one time. I learnt how to touch the sharks and how to control them in a responsible way," he said.

But the biggest takeaway was that he understood how sharks could "bond" with people too, as long as they are respectfully treated.

This was most apparent in the feeding session The New Paper team witnessed.

Despite the feverish behaviour from the hungry sharks, Mr Fazhrid's calm but purposeful actions managed to soothe the circling animals.

He even took time to pet them, much to the delight of the tourists who happily snapped pictures.

"The sharks have their own personalities and behaviours - some will come close, and some will think that you are a friend to them," he said as he smiled at a passing hammerhead shark.

"We just have to understand them."

Keep calm and dive in

As I lowered myself into the tank full of 100 sharks for the Shark Dive experience at the S.E.A. Aquarium, I remembered what aquarist Fazhrid Abdul Karim told me.

"Sharks can tell when people are calm and when they're not. They have electroreceptors, so they know how fast your heart is beating," he said.

I was calm when I changed into the wetsuit they provided. I donned the diving gear the staff helpfully set up, and I was calmness personified as I got into the water.

But as my guide gestured me to submerge, my mind went to how, moments before, I watched a shark feeding session.

These huge animals all fighting one another for the mackerel that Mr Fazhrid was holding out, the gnashing and biting erupting in a frenzy of bubbles.

Bad move - it felt like my heart was beating so fast that the sharks wouldn't need electroreceptors to feel it.

As soon as we went all the way down though, I realised I have nothing to fear.

While some curious sharks did approach and circle me for a while, they soon swam away, totally uninterested.

The Shark Seas Habitat at S.E.A. Aquarium reminded me of the open seas in Malaysia and Thailand that I had dived in, complete with corals, rock formations and sand beds.

Ever since I took up diving 10 years ago, I have dreamt of being able to look at sharks up close.

Aside from a few passing reef sharks, I never got the chance.

With this programme, it felt like I got to be as near as I wanted.

So close that I could see the odd shape of the hammerhead shark.

I gaped at the huge tawny nurse shark, and it was fascinating to watch the black-tipped sharks dart among one another.

Surfacing from the 45-minute dive, I felt lucky to have gone through the experience. - HARIZ BAHARUDIN

This article was first published on Mar 20, 2017.
Get The New Paper for more stories.