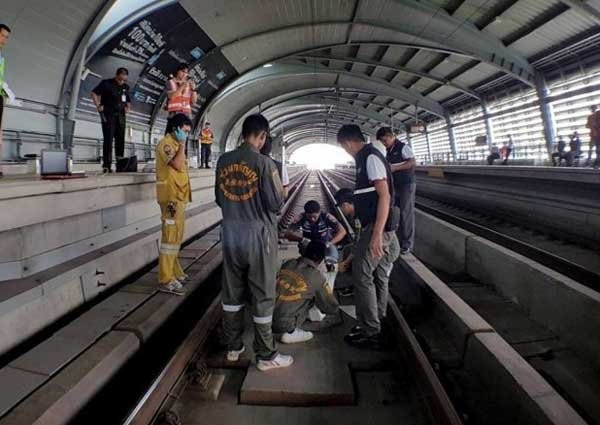 The sister of a pregnant woman killed when she fell onto Airport Rail Link tracks at Ban Thap Chang station has cautioned people to be careful about what they believe when reading online news.

Initial reports posted online speculated that Rosarin Plianlar may have committed suicide, but it later emerged that she probably fell on the railroad tracks by accident.

Rosarin's younger sister on Twitter on Monday night responded to early coverage: "My sister didn't commit suicide. Her life was great, her family was warm and her job was good. People should read news carefully."

The investigation into the incident appears to confirm that her death on Monday morning was accidental.

"There is convincing evidence for the theory that she lost her balance and accidentally fell," Railway Police Division's chief Pol Maj-General Surapong Thanomjit said yesterday.

Police investigators have interviewed three security guards at the station, the train driver, Rosarin's husband Piyapong Rorbkorb and another witness.

"We have also checked recordings from security cameras in the area. Her husband brought her to the station and saw her off as usual. She didn't have any quarrel with him. There's no sign she was crying on her way to the platform," Surapong said, downplaying initial speculation that Rosarin might have committed suicide.

However, Surapong urged other witnesses to come forward if they saw anything different.

"Some news reports quoted some witnesses as saying she was crying before her fall," he said. "If there are such witnesses, please contact police."

Surapong said security guards at the station set off an emergency alarm to stop the oncoming train from hitting Rosarin but it was travelling at 60 kilometres per hour as it pulled into the station and was already too close to prevent the accident.

Rosarin's family picked up her body from the Institute of Forensic Medicine for funeral services yesterday.

Her funeral rites will be held at a temple in her hometown of Nan.

"My family is grieving over her death. We hope this is the last tragedy in the transportation system," Piyapong said.

The tragedy has raised concerns about passenger safety on the Airport Rail Link.

At present, only the Airport Rail Link's Suvarnabhumi Airport station is equipped with platform screen doors.