●       Phablet is most preferred mobile device, with 73% market share

●       New entrants taking the bite out of Apple share

The research found that phablets are especially popular in Southeast Asia, where almost three-quarters (73%) of devices used are large-screen mobile phones. Though the phablet is the fastest growing mobile phone segment globally, adoption in this region is outpacing growth in the United States, where its market share is just 48 per cent. 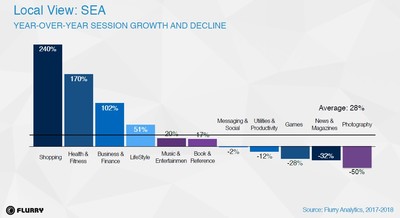 Meanwhile, the region is quickly taking to m-commerce, which has seen the biggest segment growth in 2018. The Flurry study identified that mobile shopping app usage has spiked by 240 per cent in the last year, followed by health and fitness (170%) and business and finance apps (102%). At the same time, photography app usage has halved since 2017 and news and magazine apps have seen a fall of 32 per cent. Messaging and social media use have declined marginally, by 2 per cent.

"The level of competition between mobile apps has become brutal in Southeast Asia, though the decelerating rate of global growth could signal market maturity, saturation or simply the end of the app gold rush," said Rico Chan, Managing Director, Hong Kong, Japan and INSEA of Oath.

He added, "Retailers need to consider the pace of growth in m-commerce and work with app developers to meet the needs of consumers. Users now see their phones as more than a tool for snapping photos and catching up with the news headlines."

The report also showed that there have been small shifts among mobile device brand usage, with phone and tablet manufacturers like Samsung, OPPO and Xiaomi growing marginally at the expense of Apple. This year, the iPhone and iPad major has seen its share of the market drop from 20 per cent to 12 per cent across Southeast Asia, whereas Samsung's sales have grown by two percentage points, OPPO by three and Xiaomi by four points.

Key insights and trends from Flurry's State of Mobile report:

Regional mobile users are phablet lovers, with large-screen devices securing 73% of the Southeast Asian handset market. This footprint is also reflected, to a lesser degree, by global adoption figures.

Apple's market share dropped by 12 percentage points, from 20 percent of the market in 2017 to 12 per cent this year.

Samsung's distribution grew from 28 per cent to 30 per cent.

Share of Chinese brands OPPO and Xiaomi grew by three and four percentage points respectively in the Southeast Asian market.

The top three app growth categories in Southeast Asia are Shopping, Health and Fitness, and Business and Finance.

Shopping app use has grown substantially due to users being more willing to pay via mobile devices as mobile payments become more advanced and trustworthy.

As phones come with much more advanced photo editing features, users are no longer needing to use photography apps as much as before. Gaming app usage has also fallen because ironically, mobile gamers are more willing to make in-app purchases to level, thus are spending less time in-game to advance levels.

Though in fourth place, lifestyle app usage grew by 51 per cent, compared to 2017.

Music and entertainment apps grew by 20 percent, year on year.

Books and reference apps grew 17 per cent, year on year.

Though Southeast Asia has some of the world's highest social messaging engagement, growth has fallen by 2 per cent this year, compared to 2017.

Utilities and productivity app usage have also fallen this year, by 28 per cent.

Social sharing of media--otherwise known as "Communitainment"--is driving mobile consumers to spend more than two hours per day on social and messaging apps.

The average mobile consumer spends just under five hours each day on their smartphone.

Global app usage continues to grow. In previous years, we have seen all app categories grow in tandem, yet the story is changing. In 2016 mobile apps started cannibalising their audience, with session and time-spent growth in some app categories occurring at the expense of others.

While messaging and social apps use rose year-over-year by 44%, personalisation apps, such as emoji keyboards, declined by 46%.