SINGAPORE -  Media OutReach  -  20 November 2018 -- Spackman Entertainment Group Limited (" Spackman Entertainment Group " or the " Company " and together with its subsidiaries, the " Group "), one of Korea's leading entertainment production groups founded by financier Charles Spackman, wishes to announce that the Group's upcoming film, DEFAULT , produced by the Company's indirect wholly-owned subsidiary, Zip Cinema Co., Ltd. (" Zip Cinema "), has been presold to 17 countries in advance of its expected release in Korea. DEFAULT , a financial thriller film, is set to screen at the Korean box office on 28 November 2018. 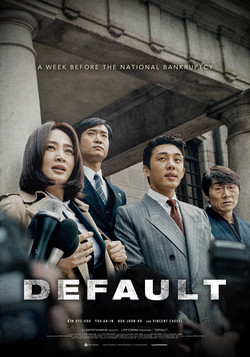 The theatrical distribution rights of DEFAULT have been bought by film distribution firms for release in Canada, Italy, Japan, China (Hong Kong & Macau), Taiwan, Singapore, Indonesia, Malaysia, Brunei, the Philippines and the United States, amongst other countries.

The film is slated to debut on 29 November 2018 at CGV Cinemas LA and Buena Park, in cities across the United States on 30 November 2018, and in Canada on 7 December 2018. Screenings in Singapore, Taiwan and Indonesia are scheduled in mid-December 2018, Hong Kong and Macau in January 2019, and Japan in the second half of 2019.

In DEFAULT , Yoo Ah-in plays a mega investor betting against the country's fortunes. Kim Hye-Soo acts as the leader of the monetary policy team at the Bank of Korea, and French actor Vincent Cassel takes on the role of the managing director of IMF. The film marks the first South Korean project of Vincent Cassel, who starred in French independent films LA HAINE and L'APPARTMENT , as well as Hollywood movies OCEAN'S TWELVE , OCEAN'S THIRTEEN and BLACK SWAN .

Directed by Choi Kook-hee, DEFAULT was previously screened at the 71 st Cannes International Film Festival in May 2018.

The estimated total production budget, including prints and advertising costs, for DEFAULT is approximately KRW 9.7 billion (or USD 8.6 million).

For more information on DEFAULT and its English trailer, visit the Group's website at http://www.spackmanentertainmentgroup.com/default-1.html .

Spackman Entertainment Group Limited (" SEGL " or the " Company "), and together with its subsidiaries, (the " Group "), one of Korea's leading entertainment production groups founded by investment veteran, Mr. Charles Spackman, is primarily engaged in the independent development, production, presentation, and financing of theatrical motion pictures in Korea. In order to diversify our revenue streams, in the second half of 2018, we will to expand our business portfolio to include the production of Korean television dramas. In addition to our content business, we also make investments into entertainment companies and film funds that can financially and strategically complement our existing core operations. SEGL is listed on the Catalist of the Singapore Exchange Securities Trading Limited under the ticker 40E.

SEGL's Zip Cinema Co., Ltd. (" Zip Cinema ") is one of the most recognised film production labels in Korea and has originated and produced some of Korea's most commercially successful theatrical films, consecutively producing 8 profitable movies since 2009 representing an industry leading track record. Recent theatrical releases of Zip Cinema's motion pictures include some of Korea's highest grossing and award- winning films such as MASTER (2016), THE PRIESTS (2015), COLD EYES (2013), and ALL ABOUT MY WIFE (2012). For more information on Zip Cinema, do visit http://zipcine.com

SEGL also owns Novus Mediacorp Co., Ltd. (" Novus Mediacorp "), an investor, presenter, and/or ancillary distributor for a total of 76 films (53 Korean and 23 foreign) including ROSE OF BETRAYAL , THE OUTLAWS and SECRETLY, GREATLY , which was one of the biggest box office hits of 2013 starring Kim Soo-hyun of MY LOVE FROM THE STARS fame, as well as FRIEND 2: THE GREAT LEGACY . In 2012, Novus Mediacorp was also the post-theatrical rights distributor of ALL ABOUT MY WIFE , a top-grossing romantic comedy produced by Zip Cinema. In 2018, THE OUTLAWS , co-presented by Novus Mediacorp broke the all-time highest Video On Demand (" VOD ") sales records in Korea. Novus Mediacorp is currently in the process of seeking a listing on the Singapore Stock Exchange. For more information on Novus Mediacorp, do visit http://novusmediacorp.com

Our films are theatrically distributed and released in Korea and overseas markets, as well as for subsequent post-theatrical worldwide release in other forms of media, including cable TV, broadcast TV, IPTV, video-on-demand, and home video/DVD, etc. We release all of our motion pictures into wide-theatrical exhibition initially in Korea, and then in overseas and ancillary markets.

We also operate a café-lounge called Upper West, in the Gangnam district of Seoul and own a professional photography studio, noon pictures Co., Ltd..

The Company holds an effective shareholding interest of 43.88% in Spackman Media Group Limited (" SMGL "). SMGL, a company incorporated in Hong Kong, together with its subsidiaries, is collectively one of the largest entertainment talent agencies in Korea in terms of the number of artists under management, including some of the top names in the Korean entertainment industry. SMGL operates its talent management business through renowned agencies such as MS Team Entertainment Co., Ltd., UAA & Co Inc., Fiftyone K Inc., SBD Entertainment Inc., and Kook Entertainment Co., Ltd. Through these full-service talent agencies in Korea, SMGL represents and guides the professional careers of a leading roster of award-winning actors/actresses in the practice areas of motion pictures, television, commercial endorsements, and branded entertainment. SMGL leverages its unparalleled portfolio of artists as a platform to develop, produce, finance and own the highest quality of entertainment content projects, including theatrical motion pictures, variety shows, and TV dramas. This platform also creates and derives opportunities for SMGL to make strategic investments in development stage businesses that can collaborate with SMGL artists. SMGL is an associated company of the Company.

The Group owns a 100% equity interest in Frame Pictures Co., Ltd. (" Frame Pictures "). Frame Pictures is a leader in the movie/drama equipment leasing business in Korea. Established in 2014, Frame Pictures has worked with over 25 top directors and provided the camera and lighting equipment for some of Korea's most notable drama and movie projects including the upcoming Korean film GIRL COPS (2018) featuring rising star Wi Ha-jun of SMGL and THE GREATEST DIVORCE (2018) starring Bae Doona of SMGL . In 2018, Frame Pictures has also won contracts to supply equipment to THE BEAUTY INSIDE (2018) , HUNDRED MILLION STARS FROM THE SKY (2018) , LOVELY HORRIBLY (2018), THE GUEST (2018), historical Korean movie MALMOI , SUITS (2018) featuring Park Hyung-sik of SMGL, MISTRESS (2018), LIFE (2018), LIVE (2018) starring Lee Kwang-soo of RUNNING MAN , MY MISTER (2018) and Netflix's first Korean original production LOVE ALARM (2018). Frame Pictures and Novus Mediacorp are currently seeking to list on the Singapore Stock Exchange.

The Company owns a 100% equity interest in Take Pictures Pte. Ltd. (" Take Pictures ") which owns a strong lineup of 10 film projects including STONE SKIPPING and the co-production with Zip Cinema for THE PRIESTS 2.

The Company owns a 100% equity interest in Greenlight Content Limited which is mainly involved in the business of investing into dramas and movies, as well as providing consulting services for the production of Korean content.

On 7 May 2018, the Company announced that it would spin-off Novus Mediacorp and Frame Pictures into a combined entity to seek listing on the Catalist Board of the Singapore Exchange Securities Trading Limited to exploit the growing post-theatrical and camera equipment leasing markets. For more details, do visit http://www.spackmanentertainmentgroup.com/