HONG KONG, CHINA - Media OutReach - 24 October 2018 - The world's longest bridge and tunnel sea crossing -- the Hong Kong-Zhuhai-Macao Bridge -- opened today (24 October), providing a major boost to regional tourism. The bridge connects Hong Kong to cities throughout the Greater Bay Area of southern China, bringing the attractions of Macao and Guangdong within easy reach and making Hong Kong a hub for visitors from around the world to explore the fascinating and diverse region.

The bridge is the first major combined road and tunnel sea-crossing in the Greater Bay Area, spanning the sea from an artificial island near Hong Kong International Airport to Macao and the mainland Chinese city of Zhuhai. At 55 km, it is 20 times longer than San Francisco's Golden Gate Bridge.

It contains enough steel to build 60 Eiffel Towers and is designed to last 120 years, two decades longer than the lifespan of most major cross-sea bridges. The mega-project will become an instant and iconic landmark for Hong Kong and the Greater Bay area and has already been named by the Guardian as one of the architectural Seven Wonders of the Modern World.

The bridge will consolidate Hong Kong's position as a hub for multi-destination travel within the Greater Bay Area, which includes nine cities in the Guangdong Province and two Special Administrative Regions. It shortens the journey from Hong Kong International Airport to Zhuhai from four hours to just 45 minutes.

A Delightful First Port of Call

The first port of call for travellers using the new bridge is Hong Kong's Lantau Island, home of the city's international airport and Disneyland and an enthralling and beautiful destination in itself. Visitors can ride the famous Ngong Ping 360 cable car to the Big Buddha statue and Po Lin Monastery and take a walk along Wisdom Path, a peaceful and spiritual trail featuring carved wooden pillars.

For an authentic cultural experience, visitors can call in on Tai O Fishing Village with its distinctive stilt houses. The bridge will be clearly visible during the boat trip from Tung Chung to Tai O or from a ride on the cable car.

Explore a Region of Wonders

The Hong Kong-Zhuhai-Macao Bridge puts a wealth of diverse cultural attractions in Macao and Guangdong within easy reach of Hong Kong, including the stunning ruins of St. Paul's in Macao, the Statue of Fisher Girl in Zhuhai, the Kaiping Diaolou, the Seven Star Crags in Zhaoqing and many more.  Visitors can now more conveniently than ever combine Hong Kong and attractions across Greater Bay Area into a single multi-destination itinerary.

A fast and convenient cross-border bus service is available to take pioneering travellers over the iconic new bridge between Hong Kong, Macao and Zhuhai. Contact your travel agent to plan your visit to the Greater Bay Area today. 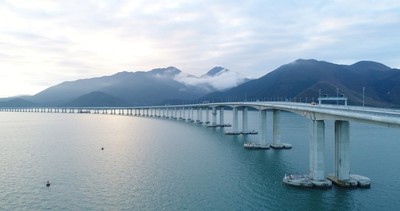