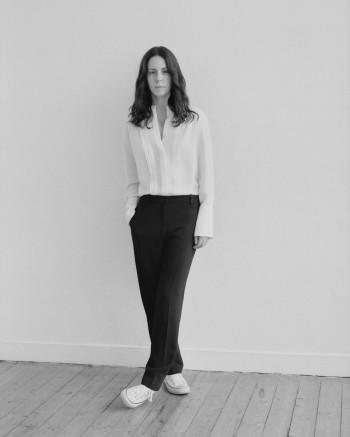 St. John, the American luxury house founded in 1962, has named Zoe Turner as its new creative director, an expanded role arching across all facets of the brand from its collections and retail environments to its multimedia presence. With a singular creative voice, Turner will take the legacy brand to new heights while remaining deeply rooted in its DNA.

A sophisticated and highly technical fashion and knitwear designer with 20 years of experience, Turner has an impressive background that includes almost a decade at Dior under both John Galliano and Raf Simons, during which she honed her skills as a knitwear expert. Turner began her career working alongside celebrated Italian designer Alberta Ferretti, and most recently headed a team while consulting at Max Mara Fashion Group.

"Zoe has a fresh outlook. She is curious, creative and passionate, and this energy will help drive St. John to the next level. She has a deep understanding of the brand's DNA and how to communicate that to customers through a 360° brand experience. We believe Zoe can introduce St. John to a larger audience through reinterpreting the brand codes and modernizing the collections," said Joann Cheng, Fosun Group's global partner, chairman of Fosun Fashion Group, which acquired a majority interest in St. John in 2017.

"Zoe is a quiet and powerful creative soul with an innate sense of how women want to dress. I love her passion, her appreciation for all eras and her eye to the future. She has a vision for the bigger picture, and I look forward to seeing the impact that Zoe will have at St. John," said Eran Cohen, chief executive officer of St. John.

"St. John has a rich history of innovation and flair. Like kindred spirits, I look forward to creating a new chapter in the story of a great American brand."

Keeping luxury, comfort, confidence and classicism at the forefront, Turner will lead a team of artisans, craftsman and technical experts to create clothes that spark desire and start a new conversation.

"I'm honored and excited about the challenge ahead, and to lead the creative teams with a new vision for today's woman."

Fosun International Limited is a technology-driven consumer group that has been listed on the main board of the Hong Kong Stock Exchange (00656.HK) since 2007. Founded in 1992, Fosun operates three business lines, in Health, Happiness and Wealth, creating world-class products and services for families around the world. In 2018, Fosun recorded revenues of RMB 109.4 billion (c.US$ 16.5 billion) with total assets worth RMB 681.51 billion (c.US$ 99.13 billion) as of 30 June 2019.

Launched in 2017 and based in Shanghai, China, FFG is a multi-disciplinary industry platform under Fosun International Ltd. that focuses on in-depth operations and strategic investments in Fashion. Rooted in China with a global vision, FFG is able to provide the complete solution for brands' sustainable growth. FFG believes that long-term value can be created through a variety of strategic initiatives. These include brand building, talent recruiting, product development, strategic alliances, channel expansion, digitalization, as well as full-spectrum local operation provided through its China operation arm, Fosun Fashion Brand Management (FFBM). Through its unique approach and position, FFG looks to create and connect cross-border communities, empower talent and drive growth. FFG's current brand portfolio includes Lanvin, Wolford, St. John, Caruso and Tom Tailor.

St. John is an American luxury house founded in 1962 on the premise of a simple, elegant and versatile knit dress. The brand has evolved over the years but the foundation of the collection remains the same today as it did from the very start -- great American design, understated and timeless elegance, unsurpassed quality and craftsmanship. The company, headquartered in Southern California, employs more than 1,500 people and is vertically integrated with workshops, stores and offices around the world. Its collections are sold in high-end specialty retailers in 19 countries, 37 company-owned stores and through the brand's ecommerce site stjohnknits.com.

St. John's newly-appointed creative director Zoe Turner understands the power and beauty of transformation. Just as her work at Christian Dior Couture made an impact -- moving the legendary house forward while remaining true to the ethos of the brand -- her role at St. John will be to reenergize and transform a treasured American fashion house while remaining deeply rooted in its history.

A sophisticated and highly technical fashion and knitwear designer with an innate sense of how women today want to dress and express themselves, Turner is creating collections that showcase brand icons and new silhouettes, proportions and colors. With a singular creative voice and vision that will span store design, communication and product, Turner will highlight American luxury vis-a-vis craftsmanship, quality and timeless beauty. In leading St. John's teams of artisans, she will harness the power of their collective skill and know-how.

A London native, Turner earned her master's degree from London's Royal College of Art. Upon graduating in 2002, Turner promptly joined Alberta Ferretti as a designer, where she worked alongside the Italian founder and creative director for four years. There, she developed her skill in designing feminine womenswear and knitwear, utilizing the talents of craftsmen and artisans in the factory adjoining the atelier. Turner was then recruited to Paris to join Christian Dior Couture, first as Senior Designer under John Galliano, then as Head Designer, Director of Knitwear under Raf Simons.

Throughout her time at the House of Dior, Turner developed knitwear into a key aspect for the brand. With Galliano, whom she worked alongside for seven years, and Simons, she sourced inspirations from various eras within the archives and around the world.

After spending nearly a decade at Dior, Turner returned to Italy to become a freelance consultant at Max Mara Fashion Group, known for its heritage and craftsmanship. In the two years just prior to joining St. John, she headed a sizable team and was responsible for wovens, accessories, leather goods, knitwear and jersey, as well as creative for the brand's communications and advertising.

With a quiet confidence and powerful command of her craft, Turner is poised to lead St. John into a new era of modern luxury. Her first collection is set to debut for Fall 2020.