A stage set for big innovation 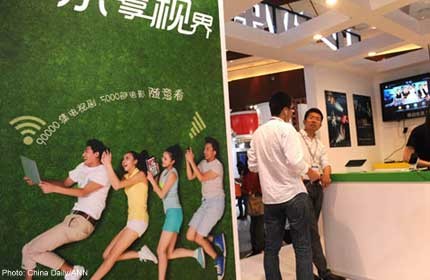 It is not common for a person to start a new business in his 50s, especially after he has achieved something significant in a previous career. However, Zhang Zhao is no ordinary man.

After serving as the president of Enlight Pictures, a film business subsidiary of Beijing Enlight Media Co Ltd, one of China's leading media and entertainment companies, for five years, he joined Le Vision Pictures, a film business wing of Leshi Internet Information and Technology Corp, as chief executive officer in 2011. The total time he was with Enlight Media was about eight years.

"I was under great pressure when I decided to quit Enlight Pictures. I was almost 50 years old, an age close to retirement in China, where society encourages young people starting out in business, not older men," said Zhang. "But I could see the Internet driving reform of the traditional film industry so I did not have much time on my side."

Since the company was founded, it has positioned itself as an Internet-based film distributor and producer. Zhang introduced a brand new business model that highly values the role the Internet currently plays and will continue to play in the film industry as technology evolves.

Shortly after the company was founded, a dramatic change took place in China's film sector. In February 2012, China and the United States signed an agreement increasing the annual quota of imported films to China from 20 to 34, of which 14 would be in cutting edge formats, such as Imax or 3D.

National box office revenues climbed to 17.1 billion yuan last year, up 30.18 per cent year-on-year. Domestic film productions took up 48.46 per cent of the market with total ticket sales of 8.27 billion yuan, according to official statistics from the film bureau under a new administration formed in March, which falls under the auspices of the State Administration of Radio, Film and Television and the State Press and Publication Administration. It was the first time that home-made productions contributed less than half of the market share in four years.

Among the six films it released last year, The Expendables 2, a co-production between Le Vision Pictures and Millennium Films in the US, one of the longest-surviving independent film companies in Hollywood, grossed 350 million yuan in China, making up 18.5 per cent of its global box office receipts as well as setting the record for non-revenue-sharing imported films in China.

It attributed the success to the on-site distribution system it has spent the past two years establishing, an important part of its brand new business model.

"Why we decided to develop this system is that the situations of local theatres across the nation vary a lot depending on a spectrum of elements, including levels of economic growth and urbanization," he said.

At the company's summit in April, it said it now has a team of 150 staff, covering 900 theatres across 60 cities. In the next half of the year it plans to expand the number of employees to 250.

In the company's big picture, excluding the on-site distribution system, the company's structure comprises a product's market positioning, offering guidance on target audiences and making it possible for customers to pre-order movie tickets and other value-added services online.

"China's theatres' vacancy rate remains more than 75 per cent. The online pre-order platform will not only have a decisive effect on improving attendance rates, but also has the potential of transforming movie derivatives to mobile electronic sales platforms," Zhang said, referring to such items as toys and clothing.

This year, the company plans to release 10 films, hoping to earn 1.2 billion yuan in box office receipts. The genres include novel adaptations and films that depict the real lives of contemporary people.

Because he studied filmmaking at New York University in the 1990s, Zhang believes his idea of cooperating with Hollywood counterparts is different from that of other Chinese rivals.

In April, the company announced the establishment of a joint venture with Hollywood's Radical Studios called Radical Vision China, which aims at producing movies with Chinese elements that would appeal to a global audience. Without disclosing the size of its investment, Zhang said his company is the dominant stakeholder in the joint venture.

"The business model of the joint venture is almost unprecedented both in the US and China," said Zhang, adding that the company is focused on developing and exploiting visual intellectual properties. Unlike Marvel Comics, a subsidiary of Walt Disney Co, which makes films based on its library of comic books, the new joint venture aims to be more original while also drawing from more sources.

The joint venture's first production, Clans of the Sacred Stones, is the first instalment of a science fiction trilogy inspired by ancient Chinese literature - Heroes of the Marshes. It required an investment of more than $100 million and is expected to begin production at the end of this year. It will feature both Chinese and international stars. The other two productions that have been confirmed are Snow Beast and Sun Chaser.

"We chose to team up with Radical Studios because they have rich experience in this area and have a visually creative crew of 150 across the globe," Zhang said.

"Whether a film has commercial value or not is the result of several factors. There are certain scenes that attract different moviegoers," he added.

The other co-productions with Hollywood include The Expendables 3. Shooting is expected to begin in September.

Unlike The Expendables 2, which involved Zhang in several tough negotiations with Avi Lerner, one of the company's co-founders, the second project only took half an hour before an agreement was reached.

"I think the trust we established with them through cooperation in The Expendables 2 made the negotiations more smooth," said Zhang.

"I don't think how much you could earn from a film has a big impact on the prospects for your company, but establishing commercial trust with major players from across the Pacific Ocean has a lot to do with your reputation and business integrity," said Zhang.

Comparing Enlight with Le Vision, Zhang said: "It's completely different, especially regarding my state of mind and the phases the industry is going through. When I was at Enlight, it was more of a survivor. Currently it's more of an initiator," he said. However, his experience at Enlight has benefited him tremendously in his current role with Le Vision.

"Zhang's rich experience with Enlight Media has made it possible for Le Vision Pictures to catch up with the leading rivals in a short time in the industry," said Cai Ling, a cultural industry researcher at the Shenzhen-based CIC Industry Research Center.

The "genes" in Enlight Pictures' corporate management can be found in Le Vision Pictures' business model. For example, the focus on the content, said Cai, who added that Le Vision Pictures has also made some innovations in its distribution. These days it combines online and offline platforms, an area it regards as very promising.

Besides the business modes, Zhang has also brought Enlight's virtue of austerity and simplicity to Le Vision. For example, staff offices in Le Vision Pictures are small. Only the meeting room takes up a large space. Unlike other film and entertainment companies, film posters cannot be found in Le Vision Pictures' offices. Instead, only pictures of audiences are visible.

"Film posters make employees associate themselves with glory but pictures of audiences remind them that they have to make customers the priority," he said.

However, the company's rapid development has attracted more and more attention. Its employees show so much more pride on their faces - and more often. However, that causes Zhang more anxiety than happiness.

"I know it's extremely difficult to keep such a simple style in the entertainment industry, but I hope they can also take pride in the defeat and suffering we have experienced rather than just the success," said Zhang.