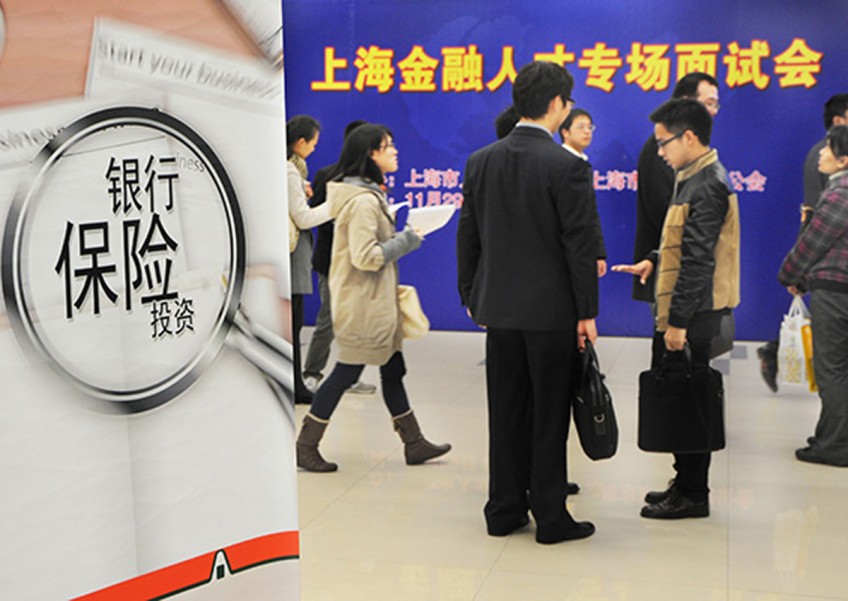 The exodus threatens to cast a shadow over the sector at a time when profits are declining and bad loans are rising amid the economic slowdown.

At least 52 executives, including those from leading State-owned lenders such as Bank of China and Construction Bank of China, have either resigned for personal reasons or moved on, media reports have estimated.

Stagnating salaries, and highly paid opportunities in private banking and the nascent online financial sector have helped fuel the cycle of departures.

"Internet financing companies have grown very rapidly in China, so it is natural that executives at traditional banks are leaving for the new companies that offer better-paid jobs," Wu Qing, deputy director of banking research at the Development Research Center of the State Council, said.

So far, 10 out of the 16 listed banks have reported that executive staff at president or vice-president level have resigned or left, according to public filings on China's stock exchanges.

These departures come as the banking industry struggles against strong financial headwinds.

Many of the leading State lenders reported that profits in the third quarter dropped below 1 per cent while bad loans increased.

Intense competition from the rapidly growing private banking sector and the rise of online finance businesses also took a toll on traditional banks.

Still, the departure of senior executives has sparked speculation that hefty pay cuts imposed by the government last year as part of its austerity drive is starting to affect the industry.

"Previously, the impact of pay cuts was limited to the big bosses of the banks," Wu said.

"But now it could extend to mid-level executives as a result of this year's poor performance in a downward economic cycle."

Top executives at State-owned companies, including banks, could face salary cuts of up to 50 per cent in austerity measures rolled out by the government in 2014, media reports have suggested.

Since the start of the year, pay packages for bank executives have been capped at 600,000 yuan (S$133,278), according to sources close to the matter and quoted in Time Weekly, a magazine based in Guangdong.

But the majority of executives that left this year have remained in the traditional banking sector, while others have moved to private banks or online finance companies.

In January, Chen Wei, former vice-president of Ping An Bank Co Ltd, joined Lufax.com, an online peer-to-peer, or P2P, lending platform. He took up the post as vice-president.

He joined WeBank, which is backed by one of the big three online players Tencent Holdings Ltd, as a member of the board of supervision.

"Some departures may have something to do with the rapid growth of financial innovation," Wu said. "But some can just be the result of the so-called revolving-door effect within the banking sector, given the State-owned nature of the top banks."

As for the executives who have already opted to pursue other opportunities, most of them are under the age of 50. This represents a blow to traditional State-owned banks which are in danger of losing the brightest and the best.

Many of those who have left are highly ambitious with strong personal goals, according to Zeng Gang, director of banking research at the Institute of Finance and Banking under the Chinese Academy of Social Sciences.

Yet he also stressed that this shake-up in the industry is a positive sign of a more market-driven sector.

"It's a sign of a more efficient allocation of resources in the banking sector that was once dominated by the big State-owned players," Zeng said.

"In fact, the top executives were the last group of people to leave. The departure of employees at lower levels had already started to take place much earlier than that," he added.