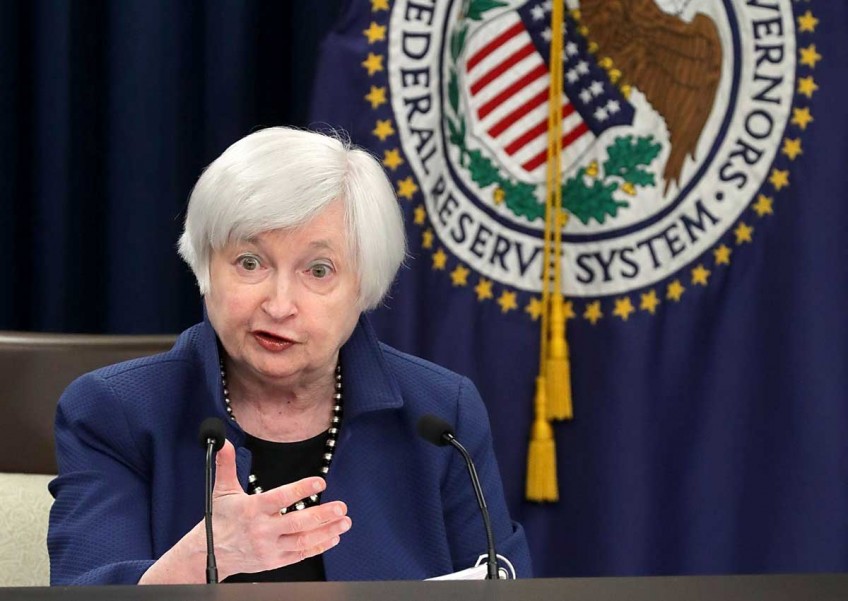 The US Federal Reserve lived up to expectations when it raised its short term rate by 25 basis points on Wednesday, but more importantly for the bulls, it did not signal more than two more hikes this year.

As a result, Wall Street rose overnight, pushing the Straits Times Index up 26.09 points or 0.8 per cent yesterday to 3,163.52, the highest closing in about 19 months.

Turnover amounted to a heavy 2.7 billion units worth $1.6 billion, and excluding warrants, there were 319 rises versus 181 falls.

UOB-Kay Hian said yesterday in a "hold" with $1.46 target that it remains positive on the company's long-term prospects, but believes near-term earnings will still be hampered by transformation costs.

"Notably, losses at TG (e-commerce firm TradeGlobal, acquired in 2015) and the ramp-up of the e-commerce logistics hub will be key earnings headwinds for 2018," said the broker.

"We are likely to turn more positive when we see a quicker scale-up in volumes in the group's network so that it can derive sufficient operating leverage from economies of scale.

"Meanwhile, we reiterate that there will likely be a significant non-recurring impairment on TG, which had SingPost recording $169.1 million in goodwill in FY16. Entry price is $1.30."

In response to the Fed rate hike, Bank of Singapore chief economist Richard Jerram said that as US unemployment continues to fall and inflation starts to overshoot, the pressure will be on the Fed to deliver a faster pace of tightening than currently planned.

"We continue to expect seven rate hikes by the end of 2018 (three this year, four in 2018) and there is a decent chance that the Fed ends up moving each quarter until rates are back to normal at 3 per cent," said Mr Jerram.

"By hiking in March, the Fed has left the door open to a faster pace of tightening this year if the data remains strong."

In his "Fed Policy: Still Behind the Curve", Mr Ken Taubes, chief US investment officer at Pioneer Investments, said the short end of the curve still offers negative real yields despite full employment, above trend growth and rising inflation conditions.

He added: "And the economic stimulus promised by the Trump administration has already started to take effect through executive orders rolling back regulations and supporting investment.

"Given these clear improvements and the upward trajectory of both the US and global economies, the Fed risks falling further behind, potentially requiring greater rate increases in the future that could destabilise the markets and economic growth."

Maybank Kim Eng economist Chua Hak Bin said in his "Synchronisation and Rate Hike Cycles" that markets are nervous about rate increases, but the past suggests Asian stock markets rise during the early phase of the Fed rate hike cycle.

He said: "Historically, a Fed funds rate of 4.5 per cent and above is when the Asia ex-Japan equity market rally peaks and falters.

"A lower 'new normal' world could imply that a lower Fed funds rate of 3.5 per cent to 4 per cent might be sufficient to trigger a financial event to derail stock markets.

"But such an interest rate threshold remains some years away, especially since the Fed rate path is more gradual."

The Atlanta Federal Reserve's latest "nowcast" of US first-quarter gross domestic product growth as at Wednesday was 0.8 per cent, down from 1.2 per cent calculated a week ago and from 3.4 per cent in February.

The latest figure was calculated after factoring in the latest jobs, consumer price and retail sales data.

This article by The Business Times was published in The New Paper, a free newspaper published by Singapore Press Holdings.