SHENZHEN, China, July 12, 2021 /PRNewswire/ -- TCL, an official sponsor of Copa América 2021, is honored to witness Argentina's historic victory in the tournament with fans all across the globe. TCL's ongoing alliance with CONMEBOL Copa América is just one of the programs through which TCL connects with growing sports communities and fulfils its commitment to consumers around the world. 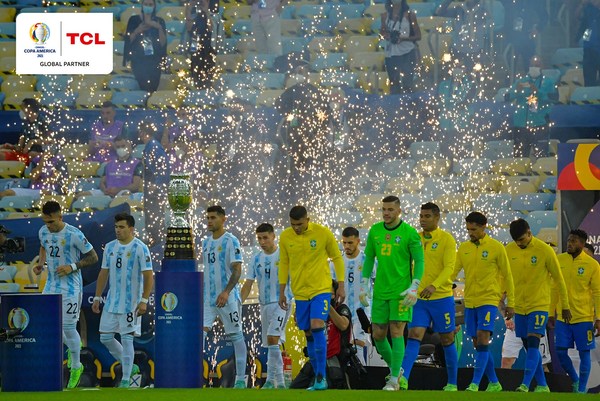 Although the entire Copa América tournament was played without fans in the stadiums, audiences were able to enjoy the best moments of the competition at home. TCL has unveiled a series of new smart TVs and appliances to help improve the lives of its many customers in Latin America who have to stay at home, including the TCL 4K Mini LED C825 TV and the smart air conditioner, among others. TCL always strives to fulfill its promise of bringing intelligent products and a convenient lifestyle to Latin America.

"Thanks to the efforts of the teams who participated in Copa América, audiences in the region and across the world were able to enjoy a fantastic sporting competition despite the challenges posed by the pandemic," said Kevin Wang, CEO of TCL Industrial Holdings, "TCL is delighted to see that Latin American customers are enjoying their stay-at-home lives with TCL TVs, smart phones and home appliances. TCL hopes to offer the best sports experiences to global audiences."

In the first quarter of 2021, the amount of time that people in Latin America spent streaming shows and movies increased by 240% year over year, and 63% of that viewing happened on a TV screen, according to video measurement and analytics firm Conviva. This year, TCL officially entered Colombia, thus completing its successful commercial deployment in Latin America. To date, TCL has expanded to all key markets in the region including Brazil, Argentina, Chile, Mexico and Peru, and has formed strong partnerships with local consumer electronic device distributors in Ecuador, Central America and several Caribbean countries.

According to OMDIA, over three consecutive years from 2018-2020 TCL maintained its position as one of the Top 3 brands with the highest sales volumes of TV sets in Latin America. In addition to its strong home theater offering, TCL witnessed gains in other major appliance segments including air conditioners, refrigerators and IoT products.

In Latin America, football is not only a game, it has become a deeply-ingrained part of the region's identity and culture. Looking forward, TCL will maintain its long-term commitment to global sports communities. Through its partnerships with CONMEBOL Copa América and other major global sporting events, TCL will continue to bring more intelligent products and experiences to customers in Latin America and around the world.