Ten Most Crucial Events of the Decade: The Release of Special Forex Industry Analytics 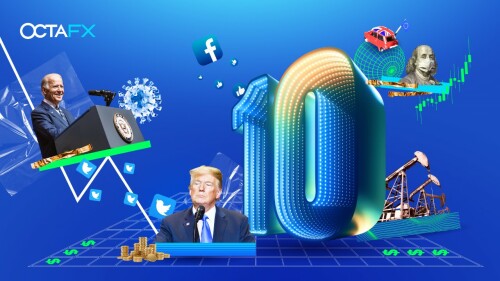 To pay homage to this special anniversary, the fintech company recalls the ten most prevalent Forex occurrences of the past decade for all the history enthusiasts out there.

The following list shows an engaging view of the last decade from OctaFX's very own perspective.

Around a year before OctaFX's inception, an event took place which came to be known as the 'Flash crash of 2010'. On 6 May, in a matter of mere moments, the stock market suffered a steep downfall leading to a loss that ranged around 1 trillion USD, before recovering again in the days that followed. The stock market's fall and swift recovery, in turn, tremendously impacted Forex market confidence in the world reserve currency.

No initial public offering (IPO) of any company has captured the industry's attention and the public's imagination quite as much as Facebook's IPO has in 2012. On 18 May of that year, the social network's IPO shares were valued at 38 USD, boosting a volume exceeding 16 billion USD and making it the heftiest tech IPO in history up to that point. As of July 2021, a Facebook share hovers at a value of 341 USD.

Now common knowledge, but when in June 2016, the results of the Brexit vote first came in, it caused utter panic in the European Union, the Western world, and in Great Britain itself. Most observers assumed that the British people would decide to remain in the European Union. The British pound sterling moved in an upswing trend right before the results of the vote were announced, but the currency pair GBPUSD ended up closing down 8% on that day.

Crude oil prices traded between 75 USD and 115 USD per barrel for most of the first half of the 2010s. This extensive era of high prices led to a booming shale oil production and an outright revolution of U.S. fracking technology. The U.S. almost doubled its oil production in 2014 (compared to 2008), prompting a severe supply flood. West Texas Intermediate (WTI) prices in crude oil fell almost as low as 26 USD per barrel in 2016. This turned into a persistent trend, as oil stocks continued to have a rough time in the second half of the last decade.

Donald J. Trump won the 2016 U.S. election against Democrat candidate and former U.S. secretary of state, Hillary R. Clinton. This in itself was a great shock for the worldwide political landscape and engraved itself on the financial sector as well. Among the Trump administration's most impactful moves would have to be legislation that in 2017 has led to 1.5 trillion USD in tax cuts which stimulated domestic corporate profits by over 16% a year later.

The Twitter presidency, or how everybody learned to love Trump tweets

OctaFX felt that president Donald Trump's sometimes erratic Twitter account deserved a separate mention. The former president often decided to publish his take on the most pressing issues like the Iran nuclear deal, relations with North Korea, Syria, and the Middle East as a whole⁠—usually, catching most by surprise. Doing politics via the American microblogging network added to Trump's unpredictable political persona, influencing the sentiments of the financial markets considerably.

In January of that year, an official statement by Apple is believed to have brought about the flash crash. The tech giant emphasised a struggling Chinese economy that consequently drew traders to sell out of more volatile currencies, among them, the Australian dollar. Many jumped on the Japanese yen, as well, which often happens when confidence in the Chinese economy fluctuates, and with it, its most significant trading partner, the Australian government.

Whoever had the right analytical outlook and strategic assessment in the professional trading community could bank on the consequences of this 'flash crash'.

Amidst the biggest virus pandemic, Donald Trump as the sitting president, eager for reelection, lost to his Democratic challenger. After much controversy and political drama, which saw fervent uncertainty in society and the markets, Joe Biden won the election with a new record of becoming the first presidential candidate to gather more than 80 million votes.

As the mother of all cryptocurrencies, Bitcoin falls to almost 3,500 USD per coin, losing around 80% of its value from its previous all-time high of close to 20,000 USD (December 2017). Ethereum likewise dips to 86 USD after having reached an all-time high of almost 1,500 USD, taking down with it the entirety of the altcoin market. Only a few could have suspected that the beginning of the most extensive bull run in crypto history yet was just a few more months off. Experts unanimously consider the coronavirus crisis to be the leading cause of this crash.

Last but surely not least, and probably most important of them all—the worldwide pandemic that changed and keeps changing the world. Much has been written about how the COVID-19 pandemic and the political and economic measures that followed have impacted legacy finances, especially the fluctuating confidence in the U.S. dollar as the world reserve currency.

OctaFX hopes you liked its picks. By no means does it represent a complete list of trends, so if the fintech company missed any significant events or trends, it sure will include them in a future publication.