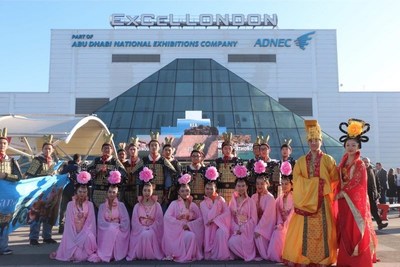 World Travel Market London, one of the travel industry's most prestigious global events, is internationally recognized for its strong professionalism, wide participation and high level of influence, and has become an important communications and trade platform for the world's tourism sector. During the World Travel Market London, 50 cosers invited by the Shaanxi Provincial Tourism Development Commission performed terracotta warrior flashmob at ExCel London and the Square near Big Ben and the London Eye, two of the most renowned attractions in London. Dressed up as the Chinese Emperor Qin Shi Huang, imperial concubines and terracotta warriors, the cosers performed graceful ancient Chinese court dances and, most notably, a powerful dance named Review of the Troops by Emperor Qin Shi Huang, drawing the attention of passers-by to stop and snap photos. The event attracted attention all over the world, raising the awareness among the world's travelling public of the many cultural wonders that await the tourist or traveller who chooses Shaanxi province as a destination for a future holiday.

On November 7, following the flashmob event, the troupe of cosers stopped at Big Ben, Chinatown, St Paul's Cathedral and the Tower of London, among other landmarks, where they received an enthusiastic response from passers-by, many of whom took selfies with the cosers and shared the photos on Facebook, Twitter and other social media platforms. The flashmob event and the staged photo sessions that followed were cheered on by admiring audiences.

At the exhibition, the Shaanxi Pavilion had on display a wide variety of vivid, eye-catching tourism presentations, drawing in a constant stream of visitors. Many of the visitors were impressed by the abundance of unique tourist attractions that Shaanxi had on offer, as, until now, the only thing they had ever heard of about the province had been limited to the terracotta warriors. In addition, the visitors were also amazed at the depth and richness of the province's history and culture

In a move to further expand the awareness of Shaanxi among the visitors to the Pavilion, the booth also displayed a variety of amusing interactive games, all of which evinced an enthusiastic response among those who played, many of them tourists visiting London from other parts of the UK as well as countries across Europe and beyond. Many consequently asked for more information about where to visit, actively looked through the available marketing materials and took away many of the informative pamphlets on display. On the evening of November 7th, the commission hosted a well-attended Shaanxi tourism promotion event in London. Through the promotion, the commission hopes, in a vivid way, to heighten awareness of the many tourist attractions and products throughout the province, create a new and recognisable international tourism brand image as the starting point of the new Silk Road, and provide visitors with an opportunity to understand the meaning behind the theme "Knowing China Starts with Knowing Shaanxi ". In addition, the promotion represented a new step for the province as part of its plan to expand into new international markets and promote the international marketing of Shaanxi's tourism sector.

The Shaanxi Provincial Tourism Development Commission plans to continue strengthening the messaging around the brand and building on the burgeoning reputation of the province's tourism sector, by rolling out more frequent global communication campaigns as well as expanding the range and variety of content.

Singapore confirms 2 more Wuhan virus cases, bringing total to 3 infected
4 Chinese New Year movies cancelled in Singapore after Wuhan virus outbreak
Andie Chen says ang bao 'married rule' is silly - how much do celebs spend on ang baos?
'Better safe than sorry': Actress Eswari stays healthy not just for herself
What to eat on the 1st and 2nd day of CNY that's not hotpot, McDonald's, KFC or Malay food
Internet laughs at antics of inattentive woman who got knocked down by carpark gantry arm
Things I wish I knew before I left my high-paying job
Singapore hospital warns against eating hotpot more than once a month, seafood and chicken broths among least healthy
No shows? No problem. Check out these early movie releases this CNY weekend
Things to do this CNY weekend in Singapore that's not eating, visiting or collecting ang baos
Singapore influencers Xiaxue, Pxdkitty go head to head in battle of the magnetic lashes
7 fun party games to play on your phones during Chinese New Year gatherings