TAIPEI, Taiwan, April 5, 2019 /PRNewswire/ -- The Edison Awards Ceremony, one of the biggest annual events for the innovative technology industry, was held on April 4th at the World Trade Center in New York, USA, where the technology giants gathered.  Among the participants, the solid-state battery pack developed by ProLogium, a unicorn company specialized in solid-state battery, won the Gold for the category <Automotive Materials & Manufacturing> and became the only gold winner of exiting energy in Asia in the past 3 years, while DowDuPont won silver and Axalta won bronze. 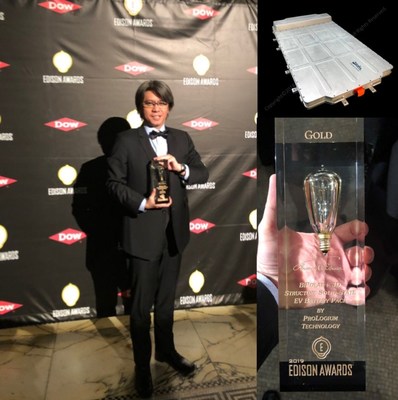 The founder of ProLogium, Vincent Yang and the Executive Managing Partner of SBCVC, Chauncey Shey attended the Award Ceremony.

The Edison Awards, known as the "Oscar Award in Innovative Technology", has been around for 33 years. Every year, the judging panel of the Edison Awards selects and praises outstanding scientific research achievements of the year that exhibit the spirit of innovation, making the Awards one of the highest honors in the innovative technology industry around the world. Technology leaders like Apple, Tesla, GE, Lockheed Martin, etc. have been granted with the Awards.

With battery being a fundamental science technology, it has significant impact on the whole vehicle performance, such as safety and mileage, thus next-generation battery tech is crucial to EV industry. Therefore, the focus of this industry is to create a safer battery with high energy density. And this is why ProLogium, the only company in the world with the capability of mass production of solid state lithium ceramic battery, becomes the industrial benchmark and the hot topic of investment sector.

On top of that, in addition to successful mass production of solid state battery, ProLogium is the first company to integrate the battery pack with BiPolar+ technology and the mechanism tailor made for solid-state battery, thus creating a solution that has greatly simplified the cooling system, BMS system, and protection mechanism of battery pack to increase the space utilization rate of battery cell (assembly efficiency) to 75%, which is 35% higher than conventional battery pack.

Currently the samples of ProLogium's solid-state battery have been sent to first-tier car makers in the world and tested for the planning of cooperation. The sample car will be introduced in Q4 this year.

During the Ceremony, Vincent Yang said at the scene: "The BiPolar+ battery pack has gathered ProLogium's achievements in solid-state battery R&D over the past 12 years as well as the mechanism design created based on the characteristics of solid-state batteries. Our effort aims to improve the efficiency of battery pack through optimizing the stability and safety of solid-state battery. Currently, our proposed solution has been tested by several first-tier companies worldwide. The recognition from the judging panel of the Edison Awards further strengthened ProLogium's belief that our R&D achievements are disruptive and EV pack solution has high potential in commercialization.

The Executive Managing Partner of SBCVC, Chauncey Shey, said in an interview: "In the field of new energy, most of the innovative technology R&D was led by national research institutions or laboratories. Now, startup companies like ProLogium who have led the industry in terms of battery technology, mass production and business operation are very rare. Therefore, we are hoping that ProLogium can be a leader in innovation not only for the solid-state battery industry, but also for the entire new energy industry."

When talking about the entrepreneurial process, Vincent Yang mentioned that: "It is very difficult to make solid-state batteries. In the past few years, many people doubt that we can be successful. However, I know that we are on the right path. Even if I was laughed by 99% of people, I still have to move on. Now, as a startup company, ProLogium Corporation's technology and products have been recognized and won Gold Awards with these top industrial giants. Our next step is to keep going, realizing the industrialization and commercialization of solid-state battery."