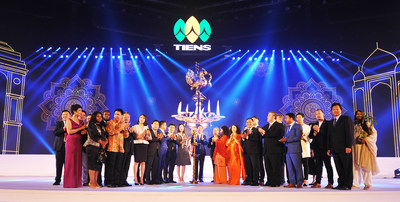 "Tiens has been actively implementing the Belt and Road Initiative, quickened the space of globalization and taken India as its one of the core markets to enhance investment and set up more branches and franchised stores," said Li Jianing, general manager of investment and development center of Tiens.

"Tiens has divided the global market into 21 areas and optimized its allocation of resources," said Li, adding that at present, Tiens has successively forayed into about 37 countries and regions, including U.S., Australia, France, the Republic of Korea (ROK), the United Arab Emirates (UAE), etc.

According to Li, Tiens will further expand its presence in the Indian E-commerce market, develop cooperation with Indian high-quality suppliers and take advantage of Tiens' global marketing network to promote Indian featured products throughout the world. It will meanwhile constantly add public welfare input in India.

Li Jinyuan, chairman and president of Tiens Group, delivered video messages to attendees in New Delhi, saying that Tiens will officially launch its new global strategy and embark on a new journey of entrepreneurship.

Founded in 1995 by Li Jinyuan in coastal Tianjin city of northern China, Tiens group has presence in many fields like biotechnology, health management, tourism, education, e-commerce and financial investment, and has branches in 110 countries and regions. Tiens had access to the Indian market in 2002 and at present it runs 12 branches and 75 franchised stores in the country.

Your spring cleaning checklist for CNY 2020
Tips and tricks to maintain your sofa
House tour: A modern luxe apartment with a 4.27m-high ceiling at Faber Walk
7 home gym ideas to help you achieve your 2020 fitness goals