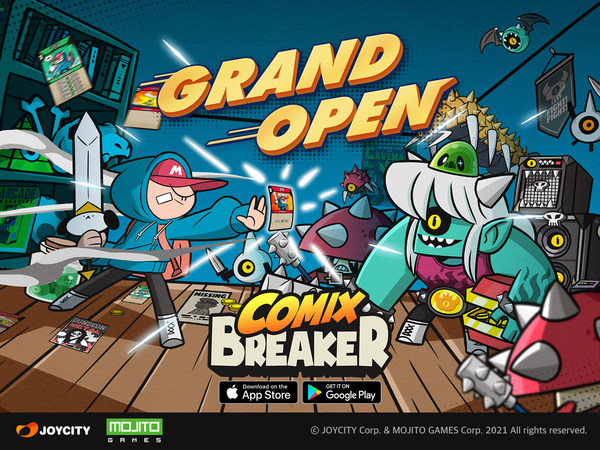 "Comix Breaker" is a roguelike card game that contains simple yet in-depth strategic elements. The game offers strategic card battle genre fun, and also has a "Competitive Mode" in which six people compete simultaneously in a time attack.

The game seeks to differentiate itself from other games with its comics style graphics, which were not common on mobile platforms thus far. Each chapter in the Classic Mode is composed of a comic book, and the unique concept is found throughout the game, including the cover and stages.

The main character "Steve" accidentally gets sucked into a comic book. The player then becomes "Steve" and ventures into a world of card battles with unique monsters. Its unique comics style is blended well in every nook and cranny of the game, including illustrations, monsters, and card backgrounds, creating a sense of humor throughout the game.

"Comix Breaker" was developed by the production team of the mobile board game "Game of Dice" which recorded 50 million downloads worldwide. Their production capabilities of strategy and board games built over the years are reflected in the contents, delivering solid overall quality and fun. It is a game that anyone can play with ease, and is recommended to players who have been thirsty for a refreshing game with a new style, especially to fans of the rogue-like genre.

Comix Breaker is available in Google Play Store and Apple App Store, and various events will be held to celebrate the official launch.