TPP could mean S$1b in tariff savings for Singapore 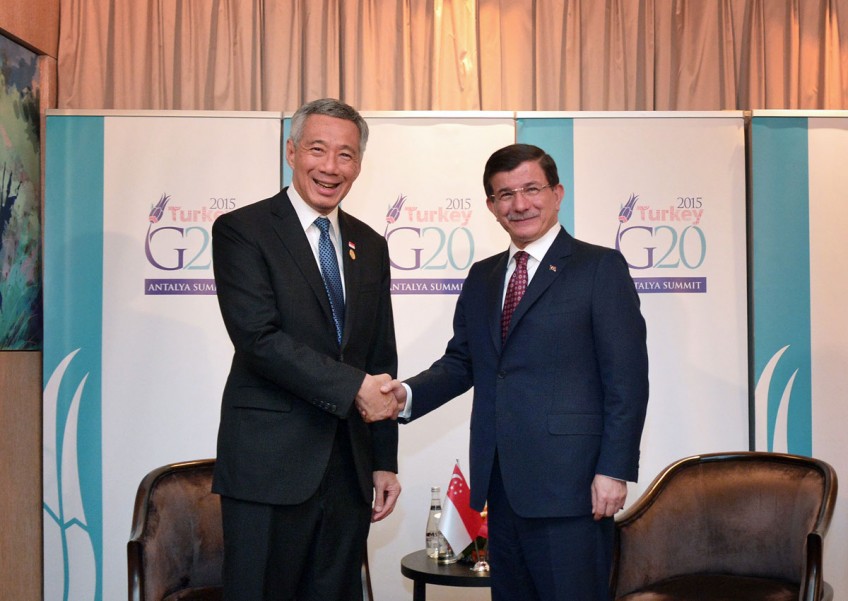 PM Lee meeting his Turkish counterpart, Ahmet Davutoglu, on the sidelines of the G-20 Summit in Antalya, Turkey.
The Straits Times

ANTALYA, Turkey - The Trans-Pacific Partnership (TPP) could be ratified by the US in one to two years, and extend to Singapore an estimated savings of S$1 billion in tariffs annually, said Prime Minister Lee Hsien Loong on Monday in Antalya.

Speaking to Singapore reporters at the end of his three-day trip to Turkey for the Group of 20 (G-20) Summit, he expressed hope that the US will ratify the TPP before or soon after its 2016 presidential election in November.

"So you're talking about one, two years to ratify. Some of the benefits will phase in over a period of time - but that's natural for any FTA (free trade agreement)," he said in response to a question from The Business Times.

"Our estimate is that (the TPP) could save us maybe a billion (Singapore) dollars worth of tariffs a year - that's not bad," he said, adding that other elements of the TPP, such as professional services or investment rules, would also accrue benefits for Singapore.

This is especially since the TPP deal can be multilateralised to other countries, resulting in positive spillover effects.

Negotiations on the largest regional trade accord in history may have been concluded in October, but the deal still has to be ratified in all 12 countries - Australia, Brunei, Canada, Chile, Japan, Malaysia, Mexico, New Zealand, Peru, Singapore, the United States and Vietnam.

The Republic already has existing FTAs with all but two of the 11 other countries - Mexico and Canada.

The International Monetary Fund (IMF) has noted that TPP countries represent a massive market for Singapore businesses; together, they boast a combined population of 800 million and a combined gross domestic product (GDP) of around US$30 trillion - 40 per cent of global GDP.

Still, Mr Lee took pains to stress that the TPP was not just an economic issue, but a strategic one as well. "We have always taken the view that it is vital for us to have such an agreement tying both sides of the Pacific together - and now it's coming to pass, at last."

In his wide-ranging wrap-up interview with the Singapore media on his last day in Antalya, he spoke at length about terrorism - an issue that has gained urgency since the weekend's attacks in Paris.

When asked by BT how Singapore - as a multi-cultural and multi-religious society - should confront the issue of Islamic extremism, Mr Lee replied: "Is it something to do with Islam or not to do with Islam? Well, it is not true Islam in the way the vast majority of the believers, of Muslims, interpret the religion, or the way the vast majority of religious scholars of Islam interpret the religion. They say this is the completely perverted and wrong interpretation.

"But the people who participate in ISIS (Islamic State of Iraq and Syria) - they declare themselves as Muslims. Some of them are religious teachers, some of them are not, and they in fact know very little about Islam. But something went wrong in their lives and they say: 'Well this is the solution', and they join ISIS. And they do very bad things in the name of Islam.

"So in a way, to say that it has nothing to do with the religion - well, that is an oversimplification. The reality is the majority of Muslims do not subscribe to this. Religious leaders in Singapore - particularly Muslim religious leaders - have come out very clearly and firmly to condemn ISIS and this perverted interpretation and inhumane practice, and I think that is what is important - that we take a clear stand and we hold our multi-racial harmony together in Singapore."

Mr Lee flew back to Singapore on Monday. He travels next to Manila in the Philippines for this year's Asia-Pacific Economic Cooperation (Apec) Summit, which begins on Wednesday.

This article was first published on Nov 17, 2015.
Get The Business Times for more stories.